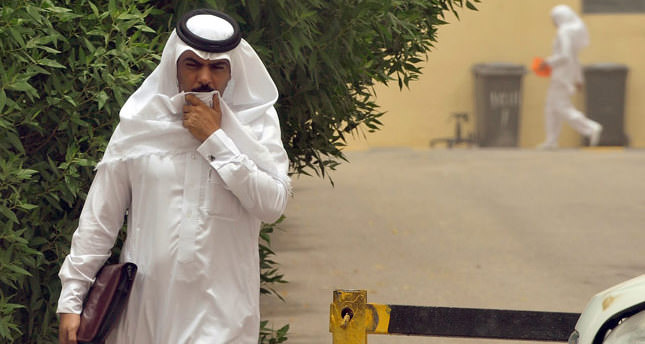 by French Press Agency - AFP
Apr 09, 2014 12:00 am
JEDDAH, Saudi Arabia — Saudi health authorities announced on Wednesday another death caused by the MERS virus in the capital Riyadh, bringing the nationwide toll to 67.

The 57-year-old Saudi national had been suffering from chronic illnesses, the health ministry said.

It also reported that another two Saudis had been infected by the Middle East Respiratory Syndrome, one a 51-year-old and the other a
90-year-old, both of whom are suffering chronic illnesses.

The latest figures bring to 179 the number of cases of MERS in Saudi Arabia since the virus first appeared in the kingdom in September 2012.

The virus was initially concentrated in the eastern region but has now spread across more areas.

Eleven new cases were reported in the western port city of Jeddah in recent weeks, causing a wave of panic fuelled by rumours circulated on social networks.

Of the 11 victims, two died while six have recovered and another three are undergoing treatment, according to the health ministry.

Three of the patients in Jeddah were health workers, including one of the two who died, prompting authorities to close the emergency department at the city's King Fahd Hospital.

Patients were transferred to other hospitals while the department was disinfected in a process expected to take 24 hours, the ministry said on Tuesday.

The MERS virus is considered a deadlier but less-transmissible cousin of the SARS virus that erupted in Asia in 2003 and infected 8,273 people, nine percent of whom died.

Experts are still struggling to understand the disease, for which there is no known vaccine.

A study revealed that the virus has been "extraordinarily common" in camels for at least 20 years, and may have been passed directly from the animals to humans.

The World Health Organisation said at the end of March that it had been told of 206 laboratory-confirmed cases of MERS infection worldwide, of which 86 had been fatal.