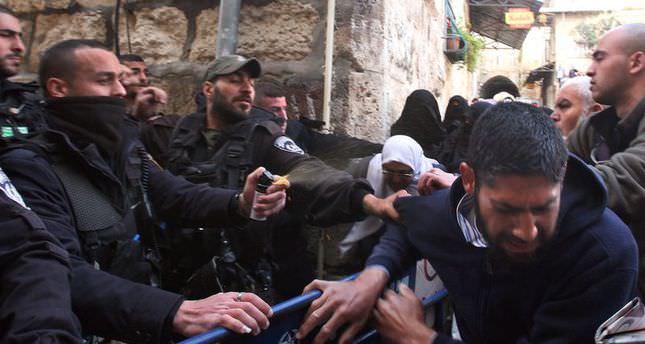 by AA
Apr 13, 2014 12:00 am
AL-QUDS — Two Israeli policemen and four Palestinians were injured on Sunday during confrontations in Al-Aqsa Mosque complex after Israeli police stormed the premises, eyewitnesses and the Israeli police said.


The Israeli policemen were injured when "dozens threw rocks and petrol bombs" towards Israeli police forces inside and around the mosque complex, according to a statement by Israeli police.
Dozens of Palestinians have been staging a sit-in in Al-Aqsa Mosque compound in response to a call by Palestinian groups and figures, calling on their compatriots to flock to the holy site in the light of threats made by extremist Jewish groups to storm the holy site.
The Israeli police statement went on to say that security forces are in the process of dispersing the sit-in inside the complex, adding that policemen are using stun grenades and rubber bullets against "those who have disrupted order" inside the complex.
Eyewitnesses said that four worshippers have suffered temporary asphyxiation from teargas fired by Israeli police, which have partially besieged the site.
On Friday, the Mufti of Al-Quds (occupied East Jerusalem) Sheikh Mohamed Hussein on called on Palestinians to camp out in the Al-Aqsa Mosque complex this week following calls by extremist Jewish groups to force their way into the holy site on the occasion of the Jewish Passover.
Last Update: Apr 13, 2014 1:04 pm