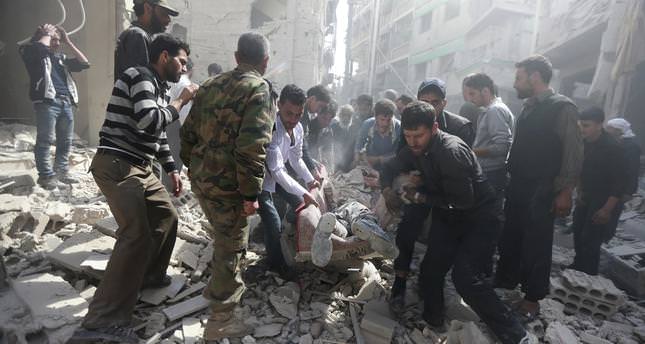 ISTANBUL — As the crisis in Syria continues to escalate, in a speech at Damascus University, Syrian President Bashar Assad on Sunday claimed that the war is turning in the regime's favor.

He said that the war that has torn Syria apart for three years and cost more than 150,000 lives is turning in the government's favor, state news agency SANA reported. "This is a turning point in the crisis, both militarily in terms of the army's achievements in the war against terror, and socially in terms of national reconciliation processes and growing awareness of the truth behind the [attacks] targeting the country," he said. "The state is trying to restore security and stability in the main areas that the terrorists struck," said al-Assad, adding, "We will go after their positions and sleeper cells later."

Al-Assad said the country "is not only being targeted because of its geo-political significance... but because of its historic role in the region and its big influence on the Arab street." He said Syria "is subject to a bid to take control of its independent decision-making, and an attempt to change its policy from one that suits the Syrian people's interests, rather than the interests of the United States and the West's interests in the region."

According to AFP on Sunday, al-Assad reiterated his belief that Israel "played a key role in supporting the terrorist groups."

Mustafa Sıtkı Bilgin, a Middle East expert, spoke to Daily Sabah about al-Assad's statement, saying, "In recent days, al-Assad made claims to international missions on the lines that he now has been very close to the victory and his opponents are going to lose their powers."

Bilgin disagrees with these assessments. "These explanations actually sound like psychological warfare. In reality, there is no winner of the Syrian civil war. Then why is al-Assad making these kinds of explanations?"

He says the timing of the assessment is important. "This is because al-Assad makes these claims at a time when his main supporter, Russia, is busy with Crimea and its attention is directed to Ukraine. That is why Assad felt himself isolated. In order to cover his military weakness, he started to wage psychological warfare. This shows that al-Assad is actually losing on military and political grounds."

Bilgin also commented on the accusations of the use of chemical gas that surfaced days ago. Both al-Assad's regime and the opposition groups accused each other of using the weapons. "It was claimed that chemical gas was used in the cities of Damascus and Hama two days ago," noted Bilgin. "The American and British diplomatic officials said they investigated this issue. It is highly probable that al-Assad's regime, in order to compensate for its military weakness, is ready to use all available materials including poisonous gas in order to weaken the opposition forces. Al-Assad is now in a weaker position, both militarily and politically, since the attention of Russia is directed to elsewhere. We might predict al-Assad's downfall is now closer than before."

Meanwhile, Syrian warplanes on Sunday launched fresh strikes on rebel strongholds on the edge of Damascus, some of which used highly destructive barrel bomb attacks, a monitoring group said. "Warplanes carried out two air strikes against areas of Douma," northeast of Damascus, the Syrian Observatory for Human Rights said, adding that 13 people, including three children and three women, were killed in that raid.

The raids came as fighting raged on the edges of Daraya between rebels and the army, which for more than a year has battled to secure the capital.

Since the start of a revolt against al-Assad in 2011, Damascus blamed all violence in the country on a foreign-backed terrorist plot, denying the existence of any grassroots movement for political change.

Like its allies Iran and the Lebanese Shiite movement Hezbollah, the government said the violence in Syria is rooted in a bid to break the anti-Israel resistance axis.