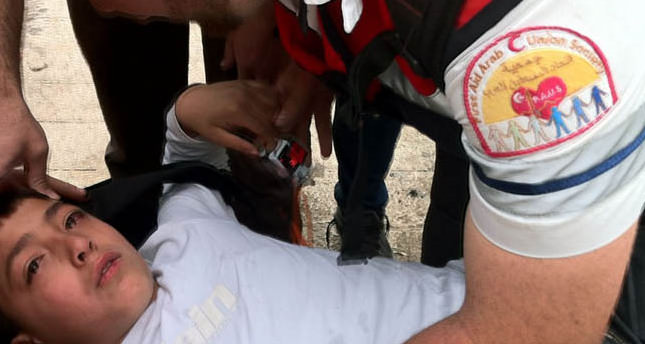 by AA
Apr 20, 2014 12:00 am
AL-QUDS — Clashes erupted on Sunday morning between Israeli policemen and Palestinian worshippers at the gates of Al-Aqsa Mosque compound in Al-Quds in East Jerusalem.

According to the witnesses, Israeli policemen assaulted Palestinian worshippers and religious students at some of the gates as they were lining up to enter the holy site.

At least seven Palestinians suffered temporary asphyxiation and bruises in the ensuing clashes as the Israeli police fired teargas in a bid to break up the crowd, they added.

In a statement, the Israeli police said it arrested 24 Palestinians as they tried to enter the compound.

Tension has been high in Al-Quds over threats by extremist Jewish groups, which have called on supporters to force their way into the holy compound during the weeklong Jewish Passover holiday, the last day of which is celebrated Sunday.