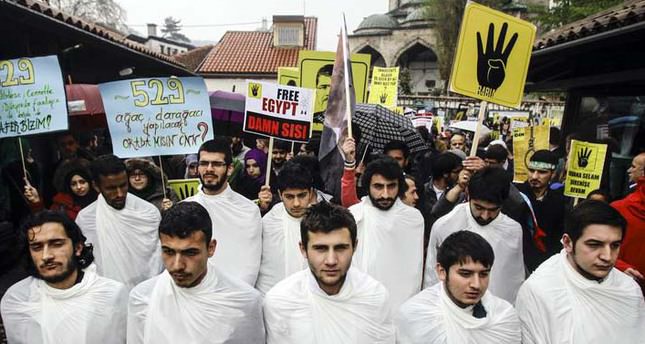 by AA Apr 20, 2014 12:00 am
SARAJEVO — More than 200 demonstrators gathered in the Bosnian capital to protest against the death penalty for 529 members of the Muslim Brotherhood in Egypt.

The crowds chanted slogans on Saturday such as "Muslim Brothers shoulder-to-shoulder", "Morsi, we are with you" and "Peace for Muslim Brotherhood and resistance".

A dozen people in the crowd stood wrapped in white sheets which, according to Islamic tradition, are used to wrap the dead.
Some of the demonstrators brought ropes and platforms symbolizing the gallows.

Most of the demonstrators were students from the International University of Sarajevo and Association Egyptian Unity. The protest in Sarajevo was held peacefully and without incident.