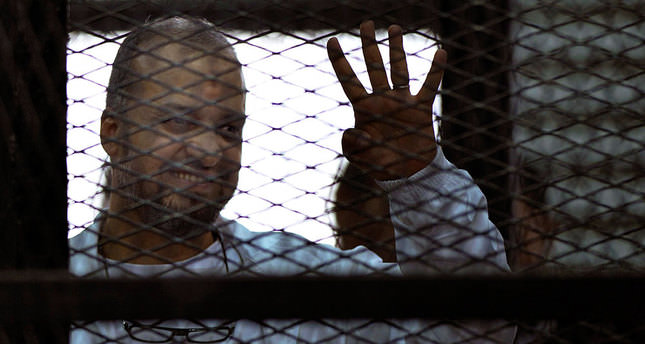 by AA Apr 20, 2014 12:00 am
CAIRO — An Egyptian country on Saturday slapped a one-year jail term against a senior Muslim Brotherhood leader for contempt of court, according to a judicial source.

The source, speaking on condition of anonymity, told Anadolu Agency that Cairo Criminal Court had jailed Mohamed al-Beltagi for one year in hard labor for contempt of court.

The decision was taken during Saturday's hearing of the Ittihadiya case in which ousted Egyptian president Mohamed Morsi and 14 others, including al-Beltagi, face charges of inciting the murder of protesters outside the Ittihadiya presidential palace in late 2012.

The trial resumed earlier in the day behind closed doors to hear more testimonies from the prosecution witnesses.

The court had earlier imposed a gag on the eyewitnesses' testimonies, citing national security concerns.

It was not immediately clear what exactly had Beltagi done that the presiding judge had considered to be contempt of court.

Morsi and his 14 co-defendants – seven of whom are being tried in absentia – are charged with inciting the murder of opposition demonstrators outside the palace.

While a total of 11 people – including eight Morsi supporters – were killed in the clashes, the trial only addresses the death of one reporter and two anti-Morsi protesters.

Morsi, Egypt's first democratically elected leader, was ousted by the military last July – after only one year in office – following protests against presidency.

He currently faces four different trials for multiple charges, including espionage, jailbreak and offending the judiciary.

Morsi, along with all of his co-defendants, insists that the charges are politically motivated.