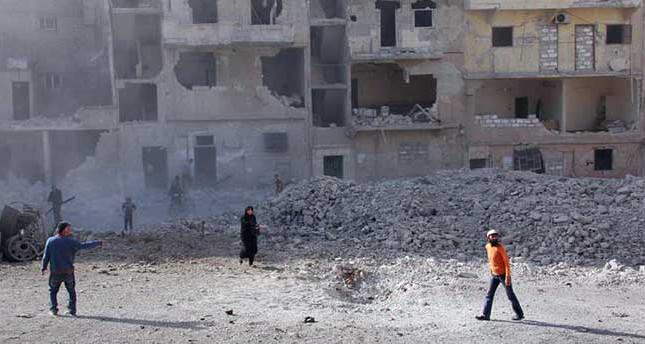 by AA Apr 21, 2014 12:00 am
ALEPPO — Syrian opposition activists have claimed that at least 93 people, including 13 children and four women, have been killed in operations allegedly carried out by President Bashar al-Assad's regime forces.

Thirty six people were killed in Aleppo, 27 in the suburbs of Damascus, 10 in Idlib, eight in Homs, seven in Daraa, two in Deir-ez Zor, two in Lattakia and one in Hama, the London-based Syrian Network for Human Rights watchdog said Monday.

Army helicopters dropped several barrel bombs, a type of non-precise explosive, in Aleppo, according to a separate report from the Local Coordination Committees of Syria.

More than 100,000 people have been killed during the ongoing three-year conflict in Syria, which has also internally displaced more than 6.5 million people, according to the UN.

More than two million Syrians are now registered as refugees in neighboring countries, including Turkey, Lebanon, Jordan and Iraq.