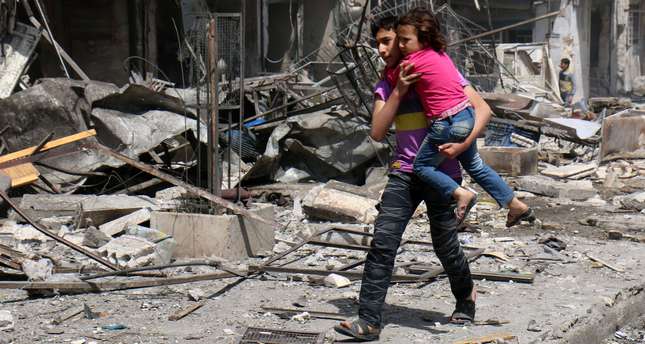 The Syrian regime's announcement of presidential elections caused outrage among critics, raising doubts on their legitimacy as they will be held against a backdrop of a civil war

ISTANBUL — News of presidential elections in war-torn Syria was met with harsh responses from the opposition and international community. President of the Syrian Parliament Mohammad al-Laham announced on Monday that presidential elections will be held on June 3 and that applications for candidates would be accepted from April 22 to May 1. Khalid Hoca, the spokesman of the Syrian National Coalition (SNC), told Daily Sabah that the decision to hold an election is a mockery as the elections will be held in a time of war.

"[Syrian President Bashar] Assad is trying to gage the support behind him through the elections," said Hoca. "However, the real election results will never be announced by the regime. They will announce results they desire."

The announcement of new elections came only days after al-Assad said the civil war was turning in his favor. Al-Laham said Syrians outside the country would vote May 28 and promised the elections would be "free and fair."

Western and Gulf Arab countries that back the Syrian opposition called plans for an election a "parody of democracy" and said it would undermine efforts to negotiate a peace settlement.

They believe it "will damage the political process and hamper the prospect for a political solution that the country so urgently needs,"
Dujarric explained. "Such elections are incompatible with the letter and spirit of the Geneva communique," referring to an agreement on the transition to democracy as the basis for negotiations between the government and the opposition.

"The Syrian regime under the al-Assads has never held a credible, free and fair election and has taken legal and administrative steps to ensure that this vote will not be fair," said U.S. State Department spokeswoman Jen Psaki. "Calling for a de facto referendum rings especially hollow now as the regime continues to massacre the very electorate it purports to represent."

Commenting on the matter, Associate Professor Mehmet Seyfettin Erol, a lecturer in the Department of International Relations at Gazi University and president of the Center for International Strategy and Security Studies (USGAM) said, "First of all, the election that is to be held on June 3 is the distorted outcome of the political resolution process which started with the Geneva process. The political resolution was converted to an Assad-centered resolution and the West, primarily the U.S., is substantially responsible."

He said disagreements within the opposition to al-Assad contributed to the stalemate. "Al-Assad found a chance to recover within Syria and started to gain the upper hand against the opponents in the field," posited Erol. "The fact that the opposition could not fulfill its targets in the short run, that it was divided internally and yet more engaged in combat, provided al-Assad with the opportunity he was waiting for."

Erol also said the international community's attention turned to the Black Sea and Eastern Europe after a crisis erupted in the Crimean peninsula between the West and Russia. The U.S. focus on outreach to Iran also negatively impacted the momentum of the Syrian opposition. "Turkey is being isolated in its Syrian policy,"

Erol remarked, referring to the West's turn to Ukraine. "Thus, al-Assad wants to make use of this process that serves to his interests. He wants to strengthen his basis of legitimacy both in Syria and in the world and to show that he has control over the Syrian civil war and the area to a remarkable extent."

He said the elections proved the Geneva process lost meaning. "It means paving the way for dictatorship through an illicit candidate and election process," said Erol. "Even though the West defines this election as a 'democracy parody,' what led to this parody was its inconsistent policies. Thus, al-Assad and his supporting block are still teasing the West."

Erol concluded, saying if the elections are not prevented, the fate of Syrian people will be left to the hands of al-Assad once more and the Geneva process will be meaningless.

Mustafa Sıtkı Bilgin, a Middle East expert, said, "The statement made by Mohammed Jihad al-Laham, head of the Syrian People's Assembly, that the elections will be held on June 3 is ridiculous for a few reasons. First, how will the elections be held since Bashar Assad's regime is conducting horrible massacres against the people? Second, how will the regime conduct the necessary arrangements, such as how are people going to register and cast their vote in the midst of a civil war? Third, how will 3 million people who became refugees in neighboring countries cast their votes? Fourth, without the consent of the opposition and the majority of people, how will these elections be fair?"

Bilgin said the elections announcement was aimed at the international community.

"These questions all indicate this is a new maneuver by al-Assad whose aim is to manipulate international opinion by showing he is desired by the people. As al-Assad could not defeat the opposition forces militarily, he will try to defeat them politically through elections. This is only a vain attempt by al-Assad's regime," he added.

Ahmed Jakal, a member of the Political Committee of the Syrian National Coalition said, "I do not find it [good] to hold elections under these circumstances. The election means that the former Geneva process will totally be ignored. There are three possible scenarios about the matter. First, Assad wins the elections, which drags Syria into serious uncertainty and the hope for peace will be wasted. It means that the war deepens and casualties increase. "As a second option, Assad uses the current conditions as an excuse and prolongs his period in office without an election in compliance with [the] Syrian constitution. This option would not be accepted by the Syrian people and the opposition. The third option, which we desire, is that Assad quits office and another prime minister who will carry Syria into the future will be elected through democratic elections."

Prof. Ali Arslan, chairman of an Istanbulbased think tank and a lecturer at Istanbul University remarked that the elections in Syria are meant to "provide a basis for their attempts.

They want to show that the period of office of Assad, the controversial president, expires on July 17. Thus, they will ensure that the election will be regarded as a routine deed and make a perception management in favor of Assad in the world. They want to use the elections as a means to attract the countries which have a subtle interest in the area. The decree of election will serve as a good instrument that will be used by states which support Assad against all odds. Yet, one has to meticulously analyze if this timing is the work of the Assad government or his 'visible' and 'invisible' allies. After a while, we can conclude that whichever state [is] supporting that election parody contributed to the making of it.

"What should be done in Syria is not to elect a dictator under the name of presidency through a fabricated election. Rather, general elections should be held as there are not actually any other institutions in the country apart from the presidency. Anything else is designed according to it. That is why perhaps the word 'election' even should not be uttered in Syria, as a fair election is not possible at the time due to internal displacement and migration to other countries. The election can only be held in some regions which are under the control of Assad. This would only be the election of the leader by the supporters of Assad, but not a presidential election," Arslan remarked.

The three-year rebellion against Assad has killed more than 150,000 people, forced millions to flee their homes and caused the government to lose control over large swathes of territory.