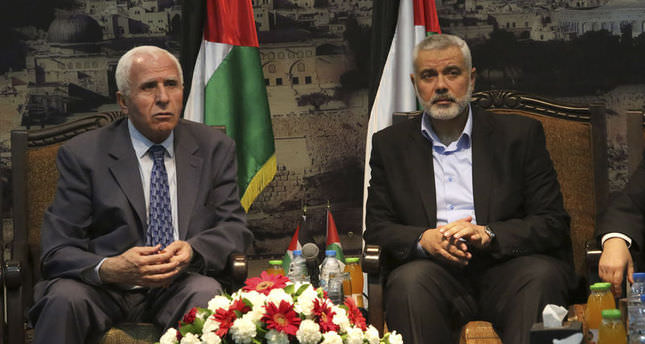 by Anadolu Agency
Apr 23, 2014 12:00 am
GAZA — Fatah and Hamas have agreed to form a unity government within five weeks, Al Jazeera reported on Wednesday.

According to the report, the agreement was reached during a Tuesday meeting between Fatah's delegation to Gaza led by Azzam al-Ahmad and Hamas leaders, including Prime Minister Ismail Haniyeh and senior official Musa Abu Marzouk

Al Jazeera quoted Haniyeh telling Fatah delegation that "the possibility for further separation between the two movements is no longer possible given the current circumstances."

The reconciliation talks between the factions were scheduled to continue on Wednesday.

Previous agreements to form unity governments between the factions have failed to bear fruit.

Before leaving for Gaza, Fatah's representative said: "We are going to the Gaza Strip not to make new proposals but to end the division."

The two sides also discussed details of potential presidential, parliamentary elections and the reconstruction of the PLO.