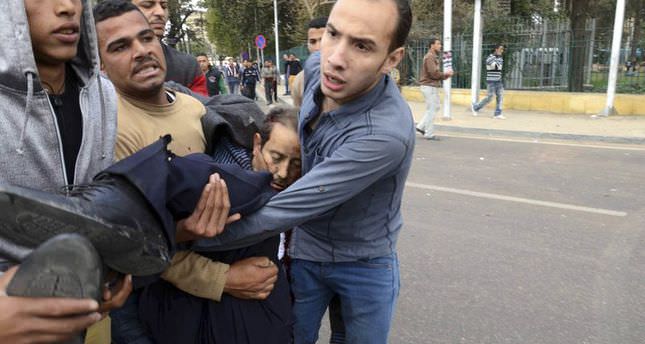 by reuters
Apr 23, 2014 12:00 am
CAIRO — An Egyptian policeman and a militant were killed when security forces raided a hideout used by radical Islamists near Alexandria on Wednesday, and a senior officer was killed near Cairo when a bomb blew up his car, the Interior Ministry said.

Militant violence has spiraled since the army toppled Mohamed Mursi of the Muslim Brotherhood last July. That poses a security challenge ahead of a presidential election in May that Abdel Fattah al-Sisi, the former army chief, is expected to win.

The hideout targeted in the raid was used by members of Ansar Bayt al-Maqdis, or Supporters of Jerusalem, the group behind some of the deadliest attacks of the last nine months, the Interior Ministry said.

The militants had opened fire on the security forces as they arrived at the hideout in Borg El Arab, some 45 km (28 miles) south-west of Alexandria.

Attacks claimed by militants have killed around 500 people since last July, mostly policemen and soldiers. The threat has been compounded by a flow of weapons from neighboring Libya. Another militant group called Ajnad Misr, or Soldiers of Egypt, has also claimed responsibility for attacks.

Ansar Bayt al-Maqdis has claimed responsibility for attacks including a failed attempt to blow up the interior minister last September, and large bomb attacks on police stations.

The United States this month designated Ansar Bayt al-Maqdis as a terrorist group.

The group first emerged in the Sinai Peninsula in 2011 after the downfall of Hosni Mubarak. Since last July, it has switched its focus from attacking Israel to killing Egyptian security forces.

It has also claimed responsibility for a February 16 attack that killed three South Korean tourists in the Sinai Peninsula.