Agreement signals Palestine on the road to unification 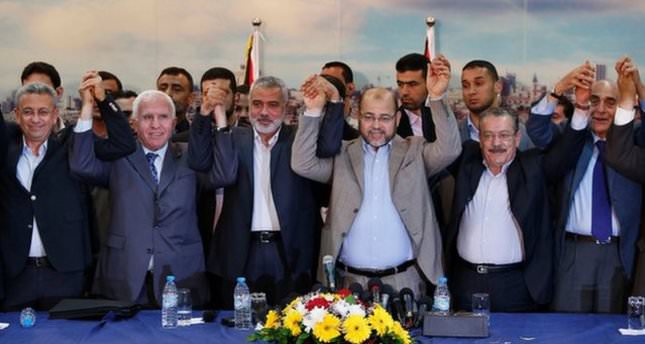 by Tevhid Nazmi Baştürk
Apr 26, 2014 12:00 am
ISTANBUL — Following nearly a decade of turbulent tensions between the two political powers of the Palestinian people, Fatah and Hamas, the news of a second reunification came as good news for most of the world's onlookers, while Mahmoud Abbas' proposed visit to the Gaza Strip raises further enthusiasm as to the sustainability of the accord.

In the intractable Israeli-Palestinian conflict, the West Bank and the Gaza Strip also faced internal conflicts between Palestinian political factions. The at times violent and regularly tense relations between Fatah and Hamas emerged as early as 2000 as Hamas began encroaching on the political monopoly of Yasser Arafat's Fatah Party. In 2005, these tensions escalated to breaking point, which saw armed conflict emerge between the two parties after Hamas' surprise legislative victory in the 2006 Palestinian elections.

Tensions continued to escalate in the year that followed until a compromise was reached resulting in Hamas controlling the coastal Gaza Strip and Fatah retaining governance in the West Bank. The Palestinian Authority would remain physically and administratively separate until 2011 when the first reconciliation deal between the two was signed.

However, the atmosphere of hope and was short lived as tensions between the two rose once again in 2013 despite the Doha Agreement of the previous year; once again leaving the troubled state in deep internal turmoil.

Earlier this week on April 23, a second reconciliation pact between Hamas and Fatah was signed once again renewing global hopes that Palestine will find a solution to bring forth political stability.

Daily Sabah spoke to Middle East expert Taha Kılınç to gain further insight as to the nature of the agreement and the political structure it will bring forth. "On paper this unification process is a difficult one which emerged out of circumstantial necessity," said Kılınç. "The Egyptian coup this summer left Hamas cornered and alone, leading Hamas to once again turn toward administrative unification with Fatah. "This agreement will see a new administrative structure emerge within five weeks in which Mahmoud Abbas will remain as the president of [the Palestinian Authority] while current Prime Minister Rami Hamdallah will be the deputy responsible for the West Bank and Ismail Haniyeh of Hamas will be his counterpart in Gaza," he continued.

As to Israel's decision to back out from the peace talks with the Palestinian Authority, Kılınç added, "Israel opposes this unification because they were undergoing peace talks individually with Fatah. Israel wanted to reach a solution that would see Abbas deposed in favor of Mohammed Dahlan as Benjamin Netanyahu does not look favorably on Abbas."

Kılınç concluded that while international hopes for the success of the unification and the stability it promises are high, the longevity of the agreement is questionable.