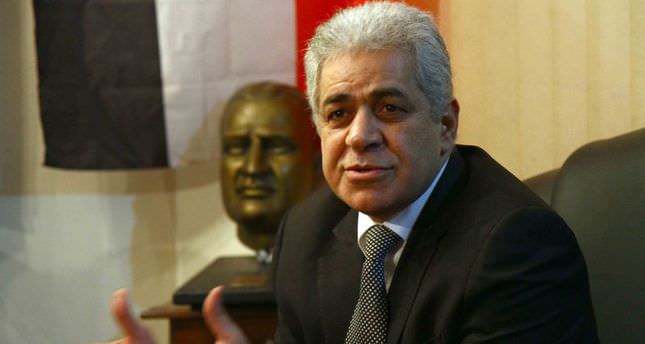 by AA Apr 27, 2014 12:00 am
CAIRO - Potential presidential candidate Hamdeen Sabahi on Saturday denied reports about his pledge to try former army chief Abdel-Fattah al-Sisi if he is elected president.

"I don't treat Field Marshal al-Sisi as a criminal who should be tried," Sabahi told a press conference at the Cairo headquarters of the Popular Current Party.
He went on to say that my main cause "is to achieve social justice".
News portal Youm7 earlier reported that Sabahi had pledged to bring al-Sisi to court if he won Egypt's presidential election late May.
Sabahi's campaign, however, came out immediately to deny the allegations, saying that the leftist politician did not make any comments about al-Sisi's trial.
Electoral campaigning is due to kick off on May 3, but this is almost the first time one of the two candidates vows to bring the other to court.
The presidential elections are part of a three-step transitional roadmap adopted by the army upon Morsi's ouster on July 3.
Since Morsi's overthrow, hundreds of people were killed in confrontations between supporters of the ousted president and security forces, which climaxed on August 14 when the authorities forcibly evicted thousands of Morsi's supporters camping out in two squares in Cairo and Giza.
Hundreds of people were killed in the eviction of the two sit-ins, which has turned into a symbol of the deadly nature of Egypt's political conflicts ever since.
Last Update: Apr 27, 2014 4:57 pm
RELATED TOPICS