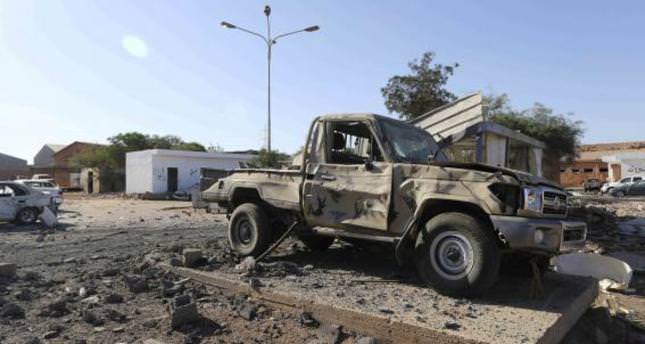 BENGHAZI, Libya — A suicide bomber detonated an explosive-packed minibus outside a Libyan army camp in Benghazi on Tuesday, killing two people and wounding two more in the second suicide attack since December.

Car bombings and assassinations of soldiers and police are common in the eastern city, where troops have clashed regularly with militants from Ansar al-Sharia group - listed as a terrorist organization by Washington.

But suicide bombing would mark a shift to tactics more common in Islamist militant struggles in the Middle East. Libya has witnessed few suicide attacks during or since the uprising that brought down Muammar Gaddafi in 2011.

A man in a white minibus stopped in front of the main gate of the Special Forces battalion 21 in Benghazi and blew himself and the vehicle up after guards refused to let him enter to camp, its commander Salem Al-Naili told reporters.

"The driver had asked soldiers who were on duty to open the gate," Naili said, at the camp where the entry gate, army vehicles, a tank and one building were damaged by the blast. "The soldiers refused to open the gate and asked the driver about his identity, then suddenly the bus exploded."

Naili accused Islamist militant hardliners of being responsible for the attack, but said: "Whatever they do, we are ready to build up an army in Libya."

Most countries have closed their consulates in Benghazi and some foreign airlines have stopped flying there since the U.S. ambassador and three other Americans were killed in an Islamist militant attack in September 2012.

In December, a suicide bomber killed 13 outside an army camp on the outskirts of Benghazi, in the first suicide attack since the 2011 NATO-backed civil war that toppled Gaddafi.

Libya's central government is struggling to control armed groups, militias and brigades of former rebels who helped oust Gaddafi in 2011 and now refuse to disarm.

Western allies are training the country's fledgling armed forces but the military is still no match for the heavily armed former rebels and militias who often use the threat of force to make demands on the state.