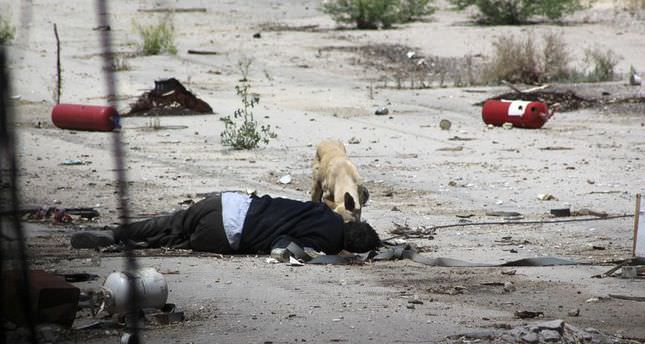 by AA May 01, 2014 12:00 am
DAMASCUS - An opposition human-rights group claimed forces loyal to Syrian President Bashar al-Assad killed 66 people Wednesday in offensives on several cities across the country.

Forces loyal to Syrian President Bashar al-Assad killed 36 people in Aleppo, 4 each in Idlib and Homs, 7 in the suburbs of Damascus, 6 in Daraa, 3 each in Deir Ez-zor and Hama, 2 in Latakia and one in Haseke, according to the London-based Syrian Network for Human Rights, which tracks civilian and dissident casualties.
On the other hand, Local Coordination Committees of Syria (LCC), a network of local opposition groups claimed Syrian army helicopters dropped barrel bombs in several opposition-controlled suburbs of Aleppo with no report of casualties, demolishing many houses.
Syria has seen heavy bloodshed since President Bashar al-Assad's regime responded to anti-government protests in March 2011 with a violent crackdown, fighting which has spiraled into a civil war which has claimed more than 100,000 lives in the past three years.
Last Update: May 01, 2014 2:34 pm
RELATED TOPICS