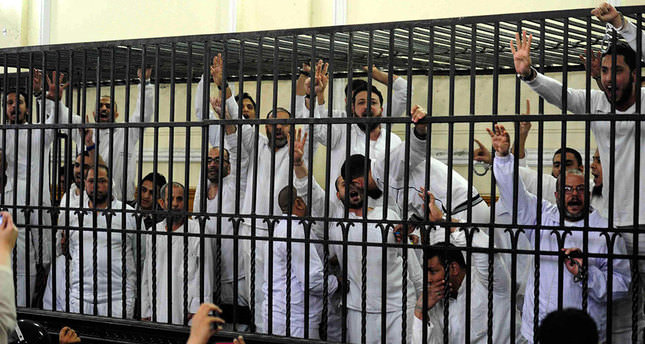 by May 03, 2014 12:00 am
CAIRO — More than 100 supporters of Egypt's deposed President Mohamed Morsi were sentenced to ten years in jail on Saturday on charges of killing and inciting violence, judicial sources said.

The verdicts for the 102 defendants, handed down ahead of a May 26-27 presidential election, relate to deaths that occurred during clashes in Cairo last July between supporters of Morsi's Muslim Brotherhood and security forces.

Two other Brotherhood supporters who were defendants in the case received seven-year jail sentences, the sources said. Only 35 defendants were present in court, the others were tried in
absentia.

Militant violence has spiralled since last July, when the army toppled Morsi and the authorities launched a crackdown on his supporters in the Brotherhood. Thousands of the movement's supporters have been arrested and hundreds killed, and its leaders are on trial.

Another Egyptian court sentenced the leader of the Brotherhood and 682 supporters to death earlier this week, intensifying the crackdown and drawing Western criticism.

Former army chief Abdel Fattah al-Sisi, who led the ousting of Morsi, is expected to win the presidential election.

Egypt has declared the Brotherhood a terrorist group, but Egypt's oldest movement says it is committed to peaceful activism.

Militants based in the Sinai have stepped up attacks on security forces since the toppling of Morsi, killing hundreds in a fast-growing insurgency.

The violence and political tensions have hammered the tourism industry, a pillar of the economy.