Iran and the Kurdish regional government to build two pipelines 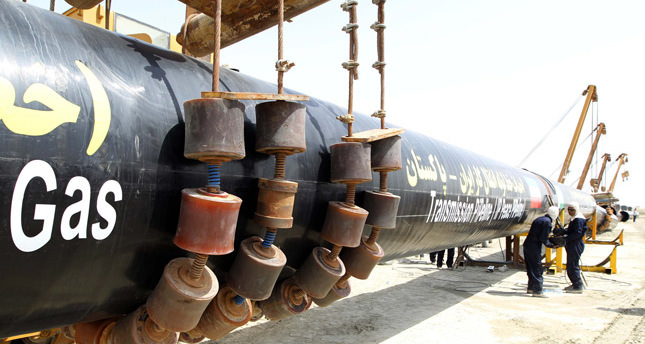 by AA May 07, 2014 12:00 am
IRBIL, Northern Iraq — Iran is close to constructing a crude oil pipeline as well as a a natural gas conduit to Iraq's autonomous Kurdish north, according to Kurdish Regional Government officials in Irbil, the region's capital.

The first pipeline will carry crude oil from the Kurdish region to Iran. Iran will refine and dispatch back the oil. The natural gas project is aimed at transferring Iranian gas to cities such as Sulaymaniyah and Irbil.

Akrayi said talks for the two projects began last year but the start of the construction work was delayed due to resignation of the Iranian oil minister, Rostam Qasimi.

With Iran's oil refineries in the western city of Kermanshah, Akrayi said that Iran was ready to buy crude oil from the Kurdish regional government.

"Iran will supply the oil and gas that we need. We expect that the [Kurdish] delegation and Iranian officials will come to a conclusion."

The Kurdish government wishes to decrease oil prices by transferring oil and gas via pipeline instead of overland, with the aim of increasing the volume.

In November 2013, Turkish and Kurdish regional administration officials signed an agreement that would enable Kurdish oil to flow from Kirkuk to the port of Ceyhan on Turkey's south-eastern Mediterranean coast but Iraqi oil has not yet been exported to international markets.

Iran could supply gas to Europe if desired - depty min.

Sending the gas with the Trans Anadolu Pipeline project, which will carry Azerbaijani natural gas to Europe, is the most cost-effective choice, Majedi said to the official Iranian news agency IRNA.

Underlining that an agreement on natural gas supplies with Europe would be a win-win deal, Majedi added that such an agreement would also help Europe to reduce its dependency on gas from Russia.