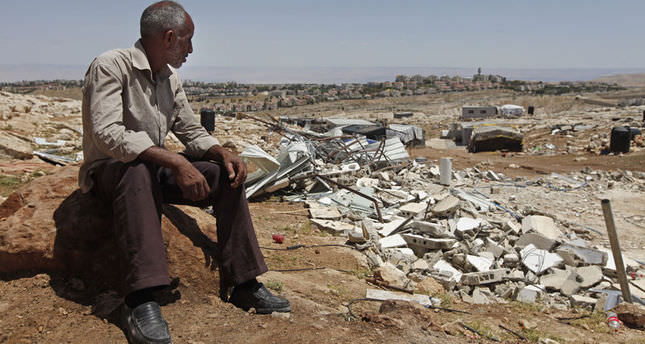 by AA May 09, 2014 12:00 am
JERUSALEM — The Israeli government announced on Thursday tenders to build 75 new housing units in Adam settlement in the north of Al-Quds (occupied East Jerusalem), a move that was strongly condemned by the Palestinians.

"Israel is seeking to surround Al-Quds with settlements by confiscating more Arab lands in order to establish the so-called Greater Jerusalem," Ahmed Qurei, a member of the Executive Committee of the Palestine Liberation Organization and head of its Al-Quds' Affairs Committee, said in a press release Thursday.

"Settlement plans are part of the Israeli policy that aims to destroy any hope of a just and comprehensive peace agreement as well as the two-state solution," he added.

Qurie also called on Arab and Islamic nations and the international community to take serious action in order to stop the Israeli violations against Al-Quds.

Palestinians accuse Israel of waging an aggressive campaign to "Judaize" Al-Quds with the aim of effacing its Arab and Islamic identity. They also insist that Israeli settlement building must stop before a comprehensive peace agreement can be reached.

International law considers the West Bank and Al-Quds occupied territories taken by Israel in 1967, viewing all Jewish settlement building on the land as illegal.