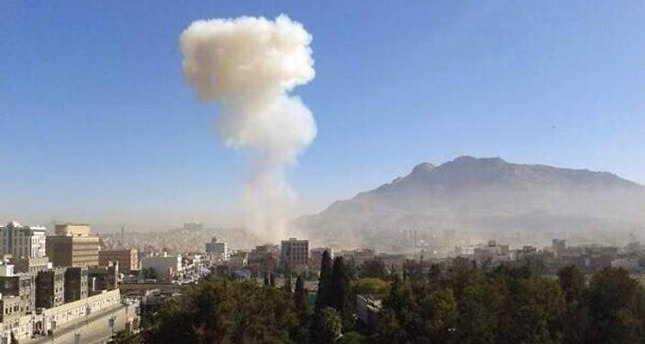 by May 09, 2014 12:00 am
SANAA, Yemen — An explosion was heard near a government building housing political security staff in Yemen's capital Sanaa on Friday, residents told Reuters. Following the explosion sirens were heard, in a warning to people in the area not to leave their homes, the residents said. The cause of the explosion was not clear, but earlier, in another district in Sanaa, residents said they had heard an exchange of gunfire between militants and security personnel at the presidential palace.

A gunfight broke out between security guards and militants at the presidential palace, witnesses said, and a security source reported several casualties on both sides. Heavy gunfire was heard in the area surrounding the palace for up to an hour, and afterwards appeared to subside.

A security source told Reuters that a vehicle carrying a number of armed militants suspected to be linked to al Qaeda had attacked the main gate of the palace and gunfire was exchanged.

"There was a gunfight that lasted about 45 minutes and then a few of the militants managed to escape with their car," the source said, adding that there were a number of casualties on both sides, however no further details were immediately available.

The source said security forces in the area were looking for the militants in a nearby public garden. An explosion was heard near a building used by the government's security service in another district of the city, residents told Reuters. There was no immediate word on the cause of the blast.