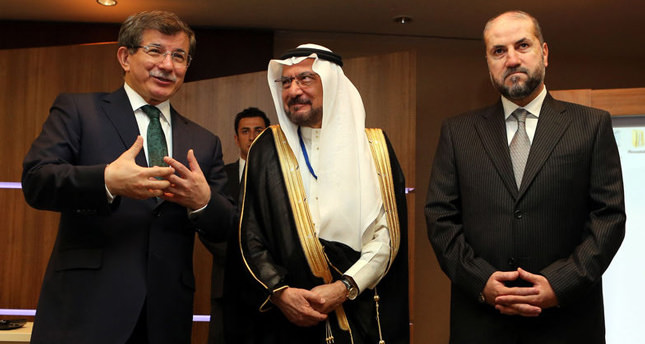 by AA May 12, 2014 12:00 am
ANKARA — Turkey's Foreign Minister Ahmet Davutoğlu has said those people who do not understand the importance of Jerusalem and Palestinian rights there are "attacking the conscience of humanity."

Speaking in the opening ceremony of "International Meeting on the Question of Jerusalem" in the Turkish capital, Ankara, on Monday as part of the International Year of Solidarity with the Palestinian People, Davutoğlu said there are three steps to be aware of when discussing Jerusalem.

"We should be aware of the areas of ethical and ontological, cultural and political responsibility for Jerusalem," said Davutoğlu.

Davutoğlu recalled that under the terms of international law, the city of Jerusalem is regarded as under occupation, and there were two major problems to consider under this framework, those being refugees and Jerusalem's legal status.

The tensions ongoing between Arabs and Israelis since WWI erupted in November 1947, when war broke out between Israel and a military coalition of Arab states and Palestinian forces.

The UN General Assembly's offered a Partition Plan to divide the area into an Arab state, a Jewish state and the Special International Regime for the City of Jerusalem -- this led to another war, commonly known as the 1948 war for Palestine. Israel took control of 60 percent of the Palestine lands, defended by a UN resolution.

The city of Jerusalem has been the object of conflicting claims by Jews and Palestinian Arabs, as both peoples consider it an irreplaceable part of their national essence.

Israel, which annexed East Jerusalem in 1980, says that the entire city is the capital of Israel and must remain under Israeli sovereignty. This claim is not recognized by the international community.

Davutoğlu also recalled that Al-Aqsa Mosque is a sacred site for Muslims and cannot be occupied.

Davutoğlu called on the international community to form a charity campaign for the Palestinian people who are "in deep sorrow."