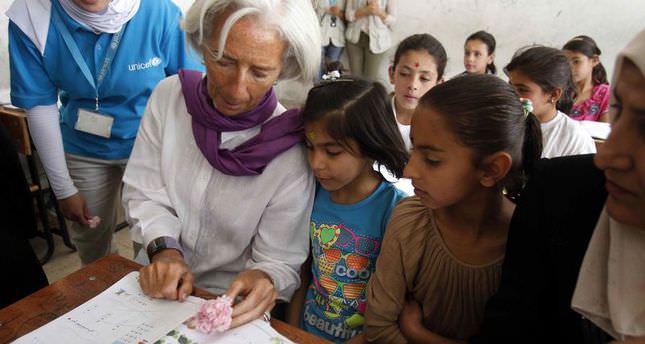 by AA May 12, 2014 12:00 am
AMMAN — The Internal Monetary Fund (IMF) chief Christine Lagarde visited on Sunday al-Zaatari camp for Syrian refugees, the largest in Jordan.

During her visit, Lagarde met with the camp's Representative of the United Nations High Commissioner for Refugees (UNHCR) Kilian Kleinschmidt and a number of civil society operatives in the camp.

Al-Zaatari is the largest camp for Syrian refugees in Jordan, housing over 110,000 refugees.

Syria has been in the throes of civil war since March 2011 after a peaceful uprising against President Bashar al-Assad escalated into an armed insurrection following a violent government crackdown on anti-regime demonstrations.

The U.N. estimates there are now nearly 2.7 million Syrians registered in neighboring countries, with more than 67,500 more in the process.

Around 1.3 million Syrians currently live in Jordan, according to official data, including 600,000 registered refugees.