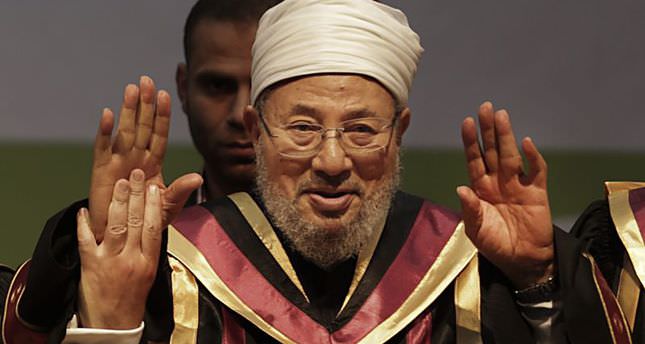 by Anadolu Agency May 12, 2014 12:00 am
DOHA — An influential Qatar-based cleric whose sermons have caused tension between Gulf states said on Sunday that Egyptian presidential front runner Abdel Fattah al-Sisi will only bring downfall to the country.

Sheikh Youssef al-Qaradawi, an Egyptian-born cleric, has always been critical of Egypt's military rule and Sisi, who as army chief was behind the ousting of elected Mohamed Mursi from the presidency last July after a popular uprising.

Qaradawi said that Israeli leaders supported having Sisi win the upcoming presidential elections, saying that Sisi protects Israel's interests and will not go into confrontation with them over the Palestinian issue.

"You have people like Ehud Barak (Israel's defense minister) saying, Vote for Sisi, Sisi is our man, he is our Sisi not your Sisi," Qaradawi said late on Sunday at a conference that was organized by an association of Muslim scholars in Doha.

Sisi is expected to easily win the May 26-27 presidential election. The only other candidate is leftist politician Hamdeen Sabahi, who came third in the 2012 election won by Mursi.

The Brotherhood, which says it is committed to peaceful activism, has accused Sisi of staging a coup and masterminding the removal of Mursi, Egypt's first freely elected president.

"From the day he (Sisi) came, all we saw is killing and bloodshed, detention and women being raped," said Qaradawi.
"Egypt is losing everything my brothers; this is a huge catastrophe," he added.

Qardawi's comments have contributed to a major rift in political relations between Qatar and its Gulf neighbors.