Abbas to meet Kerry in London 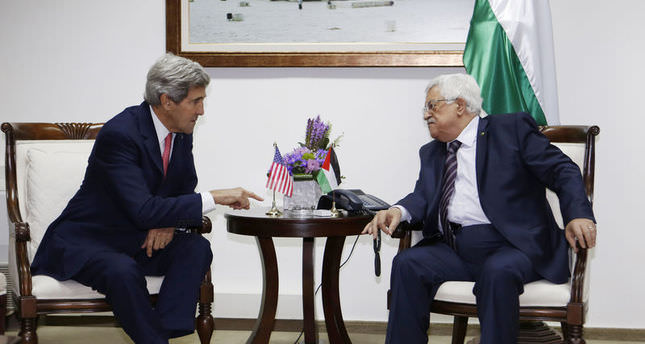 by Anadolu Agency May 13, 2014 12:00 am
JERUSALEM — Palestinian President Mahmoud Abbas will meet with U.S. Secretary of State John Kerry on Thursday in London, the first such meeting since U.S.-brokered peace talks between the Palestinians and Israel collapsed last month.

"The meeting would feature an assessment of the talks that had taken place over the past nine months," Palestinian Authority (PA) Foreign Minister Riyad al-Maliki told state-run Voice of Palestine radio station.

Al-Maliki reiterated the Palestinian conditions for the resumption of talks for three more months, including a freeze on all Israeli settlement construction in Al-Quds (occupied East Jerusalem) and the West Bank, release of the fourth batch of Palestinian prisoners as agreed earlier, and that the talks would focus on the borders issue.

Peace talks between Israeli and Palestinian negotiators – which resumed in Washington last July after a nearly three-year hiatus – collapsed last month after an April 29 deadline expired without a breakthrough.

The talks hit a snag one month earlier after Israel refused to release 26 Palestinian prisoners despite earlier pledges to do so. Abbas retaliated by formally applying for Palestinian membership in 15 U.N. conventions and agencies.

Israel has since announced a raft of punitive measures to be taken against the Palestinians after Abbas' Fatah movement last month signed a reconciliation deal with Gaza-based Hamas ending seven years of inter-Palestinian division.