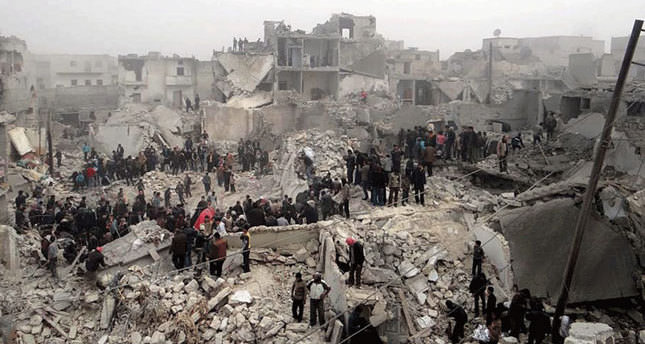 by AA May 15, 2014 12:00 am
ALEPPO, Syria — At least 64 people have reportedly died and dozens wounded in a car-bomb attack in Syria's Aleppo province near the border with Turkey, reports from both sides suggest.

The governor of Kilis, the Turkish province nearest to the attack, has said the Islamic State of Iraq and the Levant might be involved.

The report said the bodies of the victims, most of who burnt to death, were transferred to the district hospital morgue.

An additional fourteen deaths have been reported in Kilis, along with nearly hundred injured - including two Turkish citizens, AA correspondent at the scene reports.

Salih Ebu Leyla, one of the activists in Aleppo, told Anadolu Agency that they feared the death toll might increase.

"There were scores of human bodies at the blast scene. It is impossible to tell the exact number. We learned that many of the wounded who were transferred to hospitals in Turkey's Kilis have died," Leyla said.

Syria's Bab as-Salam gate, facing Oncupinar border gate in Kilis, is the main crossing through which Syrian refugees have been entering Turkey as they flee the ongoing fighting in their country.

Turkey's Reyhanli province near the Syrian border was attacked last May in a twin-blast which left 52 people dead and 236 wounded.

More than 100,000 people have been killed during the ongoing conflict in Syria, which has also internally displaced more than 6.5 million people, according to the U.N. Over two and a half million are registered as refugees in neighboring Turkey, Lebanon and Iraq.