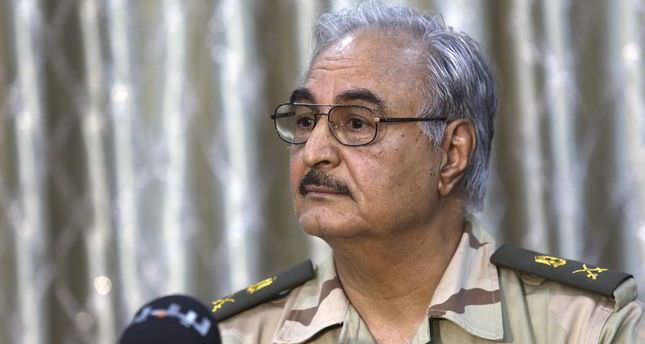 by May 18, 2014 12:00 am
ABYAR/TRIPOLI, Libya - The self-declared Libyan National Army led by a renegade general told civilians on Saturday to leave parts of Benghazi before it launched a fresh attack on Islamist militants, a day after dozens were killed in the worst clashes in the city for months.

Families could be seen packing up and driving away from western districts of the port city where Islamist militants and LNA forces led by retired General Khalifa Haftar fought for hours on Friday.

Dressed in military uniform, Hafter - whom the speaker of parliament accused of plotting a coup - said his troops had temporarily withdrawn from Benghazi for tactical reasons.

"We'll come back with force," he told reporters at a sports club in Abyar, a small town to the east of Benghazi.

"We've started this battle and will continue it until we have reached our goals," he said.

He said government and parliament had no legitimacy as they had failed to achieve security. "The street and the Libyan people are with us," he said, adding that his troops were spread out in several parts of eastern Libya.

"(LNA) members who have carried out the clashes in Benghazi are out of the control of the state of Libya and they are trying to attempt a coup for their own interests," Abu Sahmain said in a televised news conference.

A Health Ministry official said the death toll had risen to 43, with more than 100 wounded. Haftar said 60 militants and six of his soldiers were killed, and 250 militants and 37 of his men wounded.

A worker in a hospital that received at least 40 corpses said: "More bodies are coming in from areas outside Benghazi.

The Libyan army declared a no-fly zone after Haftar's forces used at least one helicopter during Friday's fighting, according to a statement on the chief of staff's website.