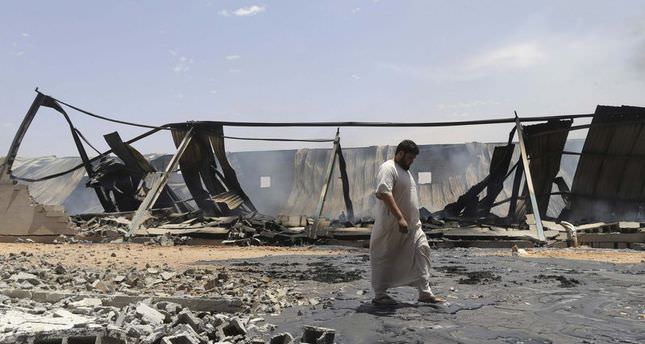 by AA May 18, 2014 12:00 am
BENGHAZI - The death toll from Friday's clashes between forces loyal to former Libyan army commander Khalifa Haftar and an army-affiliated militia in the eastern city of Benghazi has risen to 75, according a Libyan Health Ministry official.

He said that the death toll rise came after Libyan authorities had found the bodies of more victims at the site of the deadly clashes.
Al-Fitouri, however, could not determine the number of casualties on each sides of the conflict.

Haftar said that the military operation he was leading in the eastern Libyan city of Benghazi was not a military coup or an attempt to hamper Libya's march toward democracy.

"The operation came in response to calls by the Libyan people," Haftar said in a televised address late Saturday.

"It aims to protect Libyan army officers and soldiers who lose their lives every day," he added.

Haftar's irregular forces had engaged in deadly fighting with the Rafallah al-Sahati Brigade, which joined the Libyan army following the 2011 ouster and death of late leader Muammar Gaddafi.

Haftar's forces recently launched a campaign in Benghazi dubbed "Libya's Dignity," the stated aim of which is to "purge" the province of "rogue militias."

Although the Rafallah al-Sahati militia was absorbed into the Libyan army, Benghazi residents continue to accuse its members of backing armed extremist groups.

In February, Haftar – who played a key role in the 2011 uprising – prompted fears of a military coup when he appeared on television in military uniform to demand the dissolution of Libya's parliament and interim government.

He had also claimed his forces had seized control of several military and strategic sites around the country.

The Libyan army at the time quickly refuted Haftar's claims, affirming that it remained in full control of all army barracks and military units throughout the country.