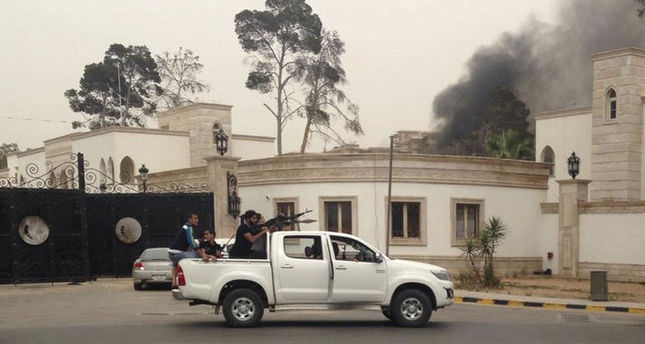 by May 19, 2014 12:00 am
TRIPOLI — Heavily armed gunmen stormed Libya's parliament on Sunday demanding its suspension and claiming loyalty to a renegade army general who has vowed to purge the country of militants.

Smoke rose over parliament after gunmen attacked and then withdrew, and gunfire erupted across Tripoli, where rival militias clashed in some of the worst violence in the city since the end the 2011 war against Muammar Gaddafi.

Details of who was involved Sunday's chaotic attack were unclear, but loyalists of retired General Khalifa Haftar said his forces and militia allies had planned the parliament assault in a campaign to rid Libya of militants.

"We announce the freezing of the GNC," said Colonel Mukhtar Fernana, a former military police officer from the Zintan region, reading out a statement on al-Ahrar TV.

Fernana said their movement was not a coup, but said the parliament had no legitimacy and should hand over power to a 60-member body that was recently elected to rewrite Libya's constitution.

It was not immediately clear how much backing Haftar's men had within Libya's nascent regular armed forces and the country's powerful brigades of former rebels or whether the parliament was fully under government control after the attack.