Dozens of children burn to death in Colombia bus fire 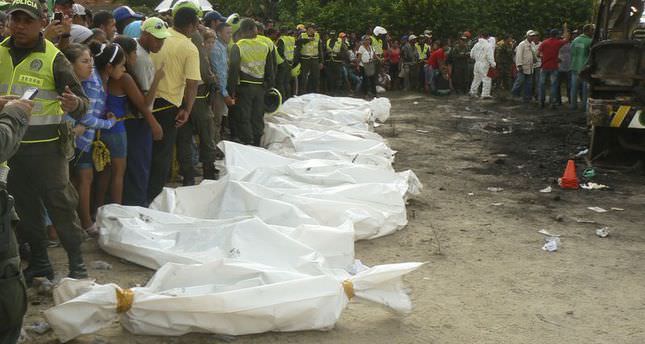 by May 19, 2014 12:00 am
BOGOTA — At least 31 children were burned to death when a bus they were travelling in caught fire in northern Colombia, the Red Cross said.

Another 25 people - including one adult - were injured and seriously burned in Sunday's accident near the town of Fundacion, Cesar Uruena, who works for the Colombian Red Cross, told reporters.

"The injured have second- and third-degree burns, and many are still in a critical condition" in hospitals in the area and in the city of Santa Marta, Uruena said.

The children aboard the bus were between the ages of one and eight and were returning home after a religious service, Fundacion Mayor Luz Stella Duran told reporters.

Department of Magdalena police said that the bus exploded around noon, and that the fire was so severe they had problems determining the number of casualties.

Stella Duran said that - according to survivors - the bus driver had been handling a container with gasoline aboard the vehicle. Police initially blamed the fire on a mechanical problem.

The driver has vanished, and angry locals went to his home and threw rocks at at the windows of his home, the mayor said.

Colombian President Juan Manuel Santos travelled to Fundacion after a final re-election campaign rally on Sunday in th capital Bogota ahead of the May 25 presidential vote.