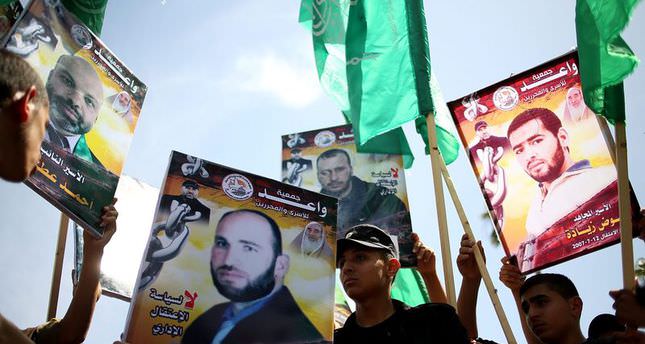 by AA May 20, 2014 12:00 am
RAMALLAH — Palestinian prisoners in Israeli jails will stage a one-day hunger strike on Tuesday in solidarity with administrative detainees in Israeli custody, a Palestinian NGO has said.

"Around 5000 Palestinian prisoners will stage a hunger strike on Tuesday in support of administrative detainees," the High Board for Palestinian Prisoners in Israeli Jails declared in a Monday statement.

Some 120 administrative detainees have been on a hunger strike since April 24 to protest their continued detention without trial by Israeli authorities.

Administrative detention is an Israeli policy by which Palestinians are held without trial, usually for reasons related to "security."

Administrative detention orders range from one to six months and can be extended by up to five years by Israeli military courts.

Around 5000 Palestinians continue to languish in more than 20 Israeli detention facilities, according to a recent report by the Prisoners Center for Studies and Research, a Palestinian NGO.

These include some 200 minors and 19 female prisoners, the report said.