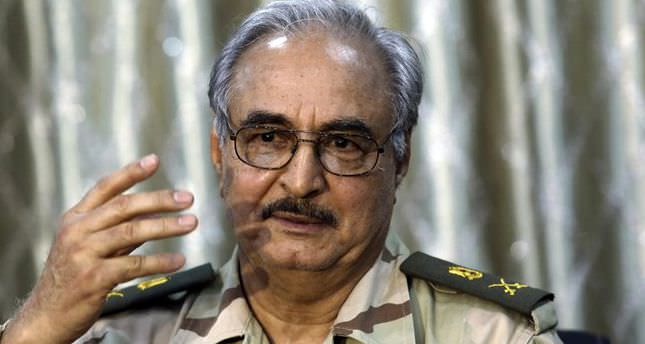 by AA May 21, 2014 12:00 am
TRIPOLI — Chief of Staff of the Libyan Air Defense Force Brigadier Jomaa al-Abani announced his support for an offensive launched by forces loyal to renegade army general Khalifa Haftar against militias – some of which affiliated with the army - in the eastern Benghazi city.

Al-Abani called on the rest of the Libyan Air Defense Force troops to follow suit, in a televised speech which was broadcast in the early hours of Wednesday.

"I am with the Libyan people against all types of terrorism," al-Abani said.

A source from the military judiciary told Anadolu Agency earlier that al-Abani is wanted by the Libyan military prosecution for alleged involvement in arranging meetings for military officers without the knowledge of the army leadership.

Haftar's operation in restive Benghazi spurred considerable division within the Libyan army leaders, who were split between supporting his offensive or backing the elected interim government which has considered the Benghazi deployments a "coup" attempt.

Former prime minister Ali Zeidan, along with the commander of Libyan Special Forces as well as army and security forces in the eastern city of Tobruk also declared support for Haftar's forces.

The fighting in Benghazi, which flared up on Friday, has left 75 people dead and 141 injured.

On Sunday, militants said to be loyal to Haftar attacked parliament headquarters in capital Tripoli and kidnapped several lawmakers.

Libyan authorities have struggled to restore law and order since Gaddafi's ouster and death in 2011 amid the continued refusal of armed militias – which helped overthrow the late leader – to give up their weapons.
Last Update: May 21, 2014 6:04 pm
RELATED TOPICS