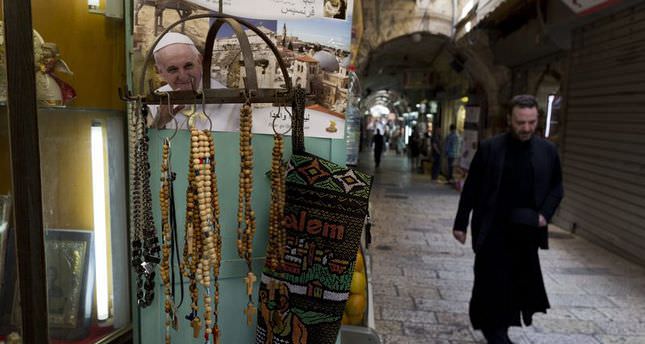 by Anadolu Agency May 21, 2014 12:00 am
JERUSALEM — Roman Catholic church leader Pope Francis is set to begin a two day tour of Palestine on Sunday, despite criticism.

During his trip, he plans to visit the tomb of Theodor Herzl, the founder of the Zionist ideology which led to the establishment of the state of Israel.

Palestinian activist Omar Barghouti, a member of the Ramallah-based Boycott, Divestment and Sanctions movement, slammed the planned visit to the tomb.

"Laying a wreath on the grave of the founder of Zionism, a patently racist ideology that has served to enable and justify the ethnic cleansing of most of the indigenous people of Palestine, is a nauseating, offensive act of complicity that Palestinian civil society cannot but condemn," he wrote in an emailed statement.

The Pope's planned route has also caused a stir among Palestinians. Instead of going directly to the Israeli occupied Al-Quds (East Jerusalem) directly from the Palestinian city of Bethlehem, he will fly by helicopter to Israel's Ben Gurion Airport near the capital Tel Aviv before moving on to Al-Quds from there.

This route gives the impression that Al-Quds, which Palestinians hope to name as the capital of their state, is Israeli territory. Israel illegally annexed Al-Quds in 1967.

"The highest moral authority in the world is coming to Jerusalem through an Israeli airport, giving the impression he is recognising the sovereignty of Israel in East Jerusalem," said Hind Khoury, former Palestinian Authority minister for Jerusalem Affairs.

"We compromised by accepting such a small state and now we can't get the recognition of the Pope that East Jerusalem is the capital of our state," the official was quoted by The Independent.

The Israelis also criticize his plans to go directly from Jordan to Bethlehem, where he will be visiting Dehaishe refugee camp, implying recognition of the state of Palestine.

Palestinian Christians on the other hand plan to welcome the Pope with a mass in Bethlehem's Manger Square. In Al-Quds, the Pope will also be meeting Jerusalem's Orthodox Christian leader Ecumenical Patriarch Bartholomew.

The meeting with the Orthodox leader will mark 50 years since former Catholic Pope Paul VI and Orthodox Patriarch Athenagoras met in 1964, ending 900 years of tensions between the two churches.