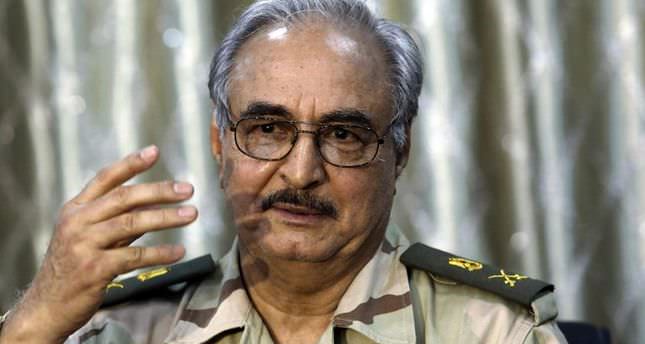 by AA May 22, 2014 12:00 am
TRIPOLI — Renegade Libyan army commander Khalifa Haftar, who unilaterally mobilized troops in the eastern Benghazi city, called for a civilian presidential council to rule the country until the election of a new parliament in June.

"The [elected] General National Conference has failed to fulfill its duties due to its persistent negligence towards the people's demands," Haftar said in a televised statement Wednesday night.

"The civilian council would transfer power to a new parliament as the supreme military council will continue to back the transitional period to protect Libya and its resources," he added.

Fears have mounted recently that Libya is slipping towards chaos after renegade army general Haftar took up arms against militia groups serving as part of Libya's regular army.

Haftar says the campaign, dubbed "Operation Dignity," is aimed at "purging" Libya of "extremists." Dozens have been killed since Haftar's offensive, in which at least one military plane was used, began on Friday.

The Libyan government, for its part, has described Haftar's operation as a "coup" against "legitimacy."

On Sunday, militants said to be loyal to Haftar attacked parliament headquarters in capital Tripoli and kidnapped several lawmakers.

Haftar's operation in restive Benghazi spurred considerable division within the Libyan army leaders, who were split between supporting his offensive or backing the elected interim government.