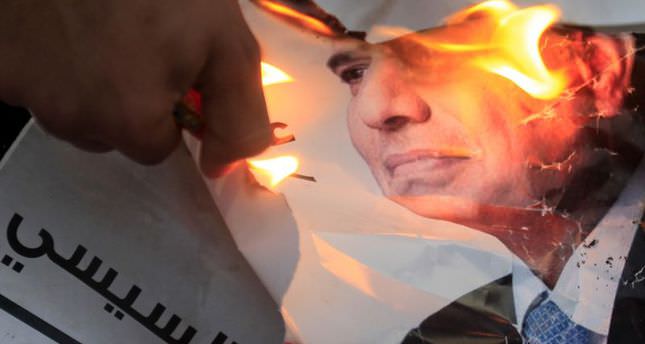 by May 23, 2014 12:00 am
CAIRO — Just over half Egyptians approve of former army chief Abdel Fattah al-Sisi, an opinion poll showed on Thursday, just days ahead of a presidential election he is expected to win easily.

The poll, released on Thursday by the Washington-based Pew Research Center, also found that 43 percent opposed the army's overthrow of elected President Mohamed Mursi last July, a move for which the military claimed national backing.

The results of the poll suggest a nation more divided than Sisi's supporters would claim, and indicate that he may have to move quickly to shore up support in a country where popular unrest has contributed to the downfall of two presidents since 2011.

Sisi's supporters see him as the kind of strong man needed to stabilize a country in crisis. But he is reviled by others as the mastermind of a coup against a freely elected leader.

Since Mursi was ousted, thousands of Brotherhood supporters have been arrested and hundreds killed and Egypt has been hit by a wave of violence.

Independent opinion polling is hard to come by in Egypt.

Pew said it had conducted face-to-face interviews last month with 1,000 Egyptians. Sisi received a favorable rating from 54 percent of those polled, while 45 percent said they disapproved of him. Fifty-four percent backed last year's military takeover.

Suggesting fatigue with the turbulent transition from Hosni Mubarak's rule, Egyptians are now more likely to say that stable government is more important than having a democratic one, Pew said.

In the security crackdown following Mursi's removal, hundreds of supporters from the Muslim Brotherhood have been killed and thousands imprisoned.

Despite the ban on the Brotherhood, the poll showed that 38 percent of Egyptians rate the group favorably. That's down from 63 percent in Pew's survey a year earlier but much higher than suggested by Sisi, who said the people had rejected the group.

Hamdeen Sabahi, Sisi's sole competitor in the presidential race, earned favorable reviews from 35 percent of respondents, with 62 percent expressing an unfavorable opinion of him.

The poll also revealed declining support for Egypt's military and judiciary, powerful institutions which have been key players in the last three years of political turmoil.

Forty-five percent said the military is having a negative influence on the country versus 56 percent who think its impact is positive.

On the judiciary, 41 percent believe it is having a positive impact, with 58 percent saying its influence is negative.

Egypt's courts drew international commendation this year after a judge sentenced more than 1,000 Brotherhood supporters to death in two cases criticized for a lack of due process.