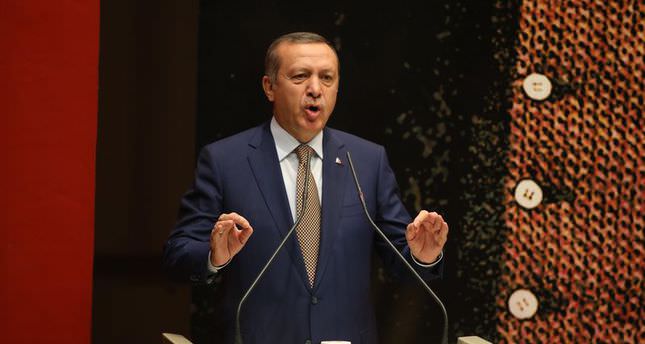 by AA May 23, 2014 12:00 am
ANKARA — The performance of the Turkish government within the last 12 years is the best indicator of its vision, said Turkey's Prime Minister Recep Tayyip Erdoğan while addressing the convention of the ruling Justice and Development (AK) Party's Provincial Chairmen Friday.


"Turkey has changed a lot now and the Turkish citizens are proud of their passport and currency." Erdoğan said.

Speaking of the Soma mine disaster which claimed 301 lives, Erdoğan said "procedures are taking place to minimize mine accidents in Turkey; however, it is almost impossible to totally prevent this kind of accidents anywhere in the world."

Referring to protests in the wake of the incident Erdoğan added " people who intend to take advantage of the street protests are making the biggest mistake."

The prime minister continued saying "we thank God Turkey has the capability to simultaneously lend a helping hand to other nations and deal with its own disasters," referring to Turkey's relief efforts in the Balkans after a deadly flood.

Referring to the presidential elections that are taking place on 10 August Prime Minister said "no chaos will be permitted and the best presidential candidate will be nominated by the AK Party who will embrace all 77 million people of the country if elected."

Turkey's president was previously elected by the Turkish Parliament, but this year the Turkish electorate will vote for their president for the first time.

"Our only aim is to create a democratic nation and raising economy," the prime minister added.
Last Update: May 23, 2014 4:51 pm
RELATED TOPICS