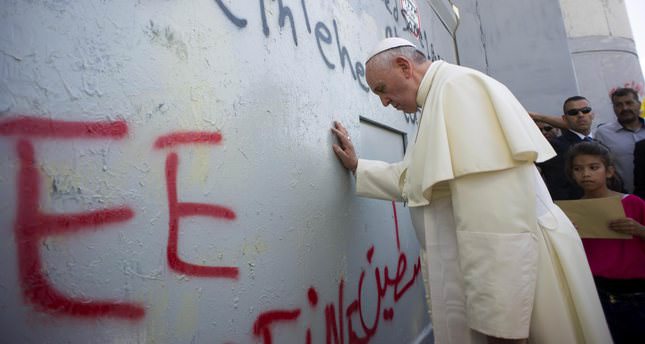 by Associated Press May 25, 2014 12:00 am
BETHLEHEM, West Bank — As Pope Francis made his way Sunday to preside over a Mass in the West Bank, he made a surprise stop at the wall separating it from Israel.

Photographers and onlookers rushed over to watch the pontiff, close his eyes and pray against the separation barrier. Only a few bodyguards stood around Francis as he put his right hand against the gray-painted barrier, directly under a manned watchtower.

Francis stood with his eyes closed in concentration. He pressed his forehead against the wall for a few moments, surrounded by graffiti including a "FREE PALESTINE" scrawled in red spray paint.

When he finished, Pope Francis slowly crossed himself, then walked away.

Israel says the massive concrete wall is necessary for its security while the Palestinians say it has stifled life in Bethlehem and engulfed land across the West Bank. Francis' stop, coming immediately after U.S.-brokered peace talks between the two sides broke down, carries a symbolic importance.

Francis also has invited the Israeli and Palestinian presidents to come to the Vatican next month to pray for peace, an invitation both sides have accepted.

Here are images by AP photographer Ariel Schalit of the Pope's surprise stop at the separation barrier.