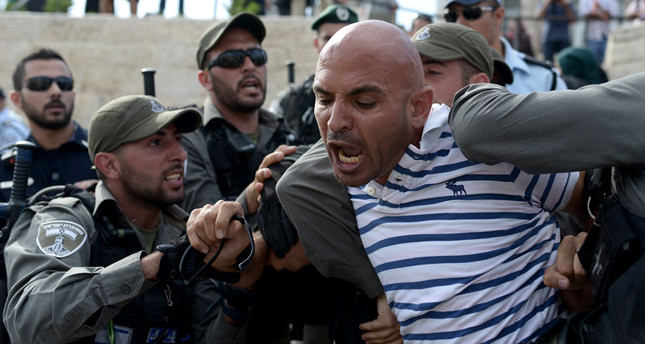 by AA May 29, 2014 12:00 am
JERUSALEM — Israeli forces on Thursday arrested two Palestinians from inside the Al-Aqsa Mosque compound in East Jerusalem.

According to the mosque guard, the pair was detained as religious students were trying to prevent 25 Jewish settlers from storming the compound through Al-Mugharbi Gate.

In recent months, groups of extremist Jewish settlers, often accompanied by Israeli security forces, have repeatedly forced their way into the Al-Aqsa complex. The frequent violations anger Palestinian Muslims and occasionally lead to violent confrontations.
For Muslims, Al-Aqsa represents the world's third holiest site. Jews, for their part, refer to the area as the "Temple Mount," claiming it was the site of two prominent Jewish temples in ancient times.

Israel occupied East Jerusalem during the 1967 Middle East War. It later annexed the holy city in 1980, claiming it as the capital of the self-proclaimed Jewish state in a move never recognized by the international community.

Israeli military forces detained 12 Palestinians in the occupied West Bank in the early hours of Thursday.

According to a recent report by the Prisoners Center for Studies and Research, a Palestinian NGO, roughly 5000 Palestinians continue to languish in Israeli jails.