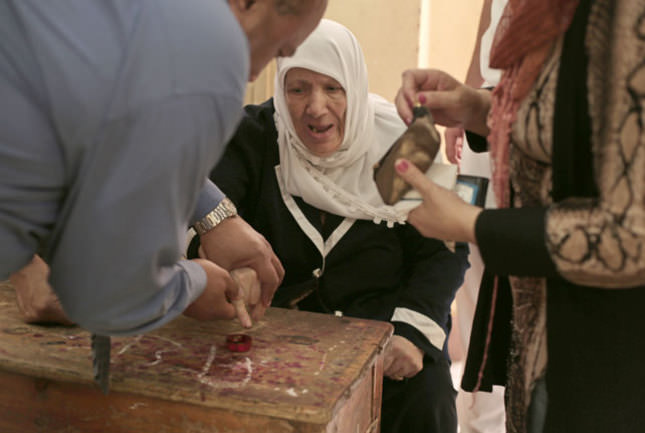 With more than half of the electorate boycotting the election, Abdel-Fattah el-Sissi, the ex-chief of staff who toppled the democratically elected president, claims victory

CAIRO — With nearly all ballots counted, the campaign of Egypt's former military chief Abdel Fatah el-Sisi said on Thursday that he won more than 92 percent of the votes in the presidential elections, dealing a crushing blow to his sole opponent Hamdeen Sabahi.

The campaign said el-Sisi, who toppled Egypt's first freely elected leader Mohammed Morsi won 23.38 million votes, with left-wing politician Sabahi taking only 735,285 votes. Some 1.07 million ballots were declared to be invalid, nearly 350,000 more than the number of votes for the 59-year-old Sabahi.

The two-day vote was originally due to conclude on Tuesday but was extended until Wednesday evening because of the low turnout. State media reported that this procedure was meant to allow the "greatest number possible" to vote.

Several but not all parties in Egypt have announced that they will boycott the vote while the National Coalition to Support Legitimacy called for a boycott to protest the coup. "The call for boycotting can be considered one of main the reasons for this unexpected reluctance. The second reason is the lack of sense of responsibility shown by el-Sisi supporters who used excuses like the high temperature not to head for the polls. This proved that this category doesn't have that sense of struggling for Egypt or democracy," said Professor Nadia Mustafa, the former head of Political Science Department at Cairo University. The turnout at the end of the three days was 44.4 percent of Egypt's 54 million voters, judicial sources claimed. That would be less than the 40 million votes, or 80 percent of the electorate, that el-Sisi had called for to head to polls last week. This would also suggest that he had failed to rally the overwhelming support he hoped for after toppling Morsi.

Hossam Moanes, Sabahi's campaign manager, questioned the legitimacy of the vote, saying there had been violations. "Until yesterday turnout was much lower than what was announced today. Did the percentage suddenly reach 46 percent?" he stated in media on Thursday.

Meanwhile, a Reuters tour of polling stations suggested turnout was low, confirming doubts about the numbers released from el-Sisi's campaign and the judiciary source." I don't believe these numbers. Polls were almost empty according to several news agencies. This is the first step of forgery," Mustafa told Daily Sabah.

"The turnout was shocking to Egypt's government and media that had been trying over the past 10 months to picture el-Sisi as a warrior against terrorism and the only hope left for Egypt," Mustafa stated. El-Sisi's supporters were seen in the Egyptian media in a panic the past two days, urging people to vote, warning that otherwise the brotherhood will be encouraged to fight for the presidency. "After they failed to handle the amount of reluctance, their experts started attempts to convince people that the number of voters were enough according to international standards," she added.

El-Sisi has set out an ambitious plan to develop agriculture, housing, education, impoverished areas and employment. The plan however is vague to many experts on how the massive funds required would be raised for the country that is suffering from its worst economic crisis since the great depression. Since el-Sisi gave a series of television interviews, many Egyptians feel he has not spelled out a clear vision of how he would tackle Egypt's challenges, instead making a general call for people to work hard and be patient.

A new Pew poll has found widespread pessimism among Egyptians regarding the direction of the country and its institutions.
According to the survey, a staggering 72 percent of Egyptians are currently dissatisfied with the direction their country is headed, compared to just 24 percent who are satisfied. The number of unsatisfied Egyptians has jumped 11 percentage points since last year, when then President Mohammed Morsi was removed from power in a military takeover.

The authorities have launched an all-out crackdown on Morsi's supporters and the members of his Brotherhood since his ouster.
Hundreds have died, thousands have been arrested and hundreds have been sentenced to death after speedy trials.

Official election results are expected on June 5. "Sisi's victory is not a surprise, the real surprise was the drastic fail all the arms that tried to support him faced, they failed to turn him from the army coup chief to a democratically elected president," Mustafa remarked.
Earlier this week el-Sisi stated in media that he will not establish a party and he bets only on Egypt's people. "I think he will consider
establishing a party soon," she concluded.
Last Update: May 30, 2014 11:08 am
RELATED TOPICS