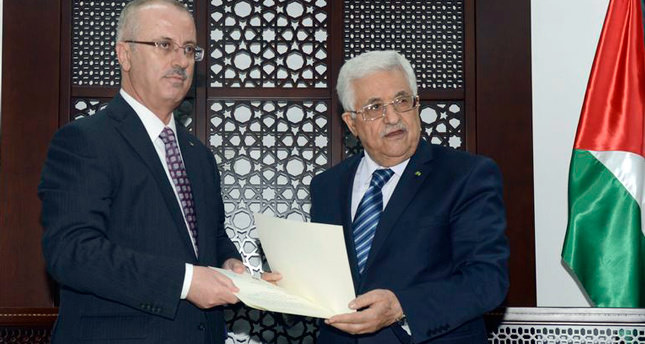 by Associated Press May 31, 2014 12:00 am
RAMALLAH, West Bank —The formation of a Palestinian unity government backed by rivals Hamas and Fatah will be announced Monday, Palestinian President Mahmoud Abbas said Saturday, adding that Israel already warned him it would take punitive steps against the new alliance.

The formation of the government would be the most significant step yet toward ending a crippling seven-year-old Palestinian political split. However, it is also bound to increase friction between Abbas and Israel's hard-line government.

Abbas said Saturday that he would respond to any Israeli punitive measures, such as withholding the monthly transfer of some $100 million in taxes and customs Israel collects on behalf of his Palestinian Authority. The funds are vital to keeping the self-rule government afloat.

The long-running Hamas-Fatah rivalry escalated in 2007 when the Islamic militant group Hamas seized the Gaza Strip from the internationally backed Abbas in 2007. Hamas, which has carried out scores of bombing, shooting and rocket attacks against Israeli targets, is considered a terror group by Israel and the West.

After the April collapse of a U.S.-mediated Israeli-Palestinian peace talks, the Palestinian rivals revived reconciliation efforts.

Negotiators met repeatedly to agree on a government of technocrats backed by both sides that is to prepare for general elections in 2015. In recent days, there were last-minute disagreements, but Abbas' announcement suggests the issues have been resolved.

Palestinian officials have said a state of Palestine is eligible for membership in 63 international organizations, treaties and conventions. Last month, Abbas signed membership requests for 15 conventions, and his aides have said the Palestinians planned to sign up for more in several stages.