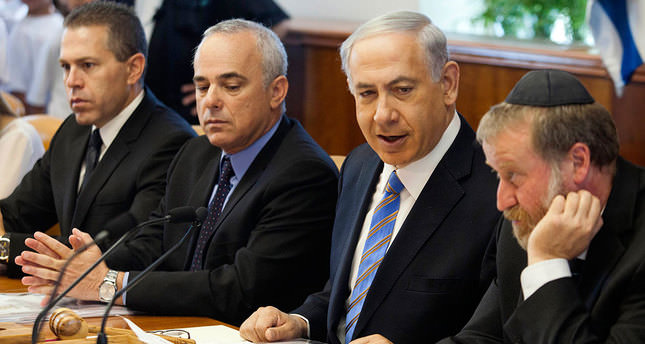 by AA Jun 01, 2014 12:00 am
RAMALLAH — Israeli Prime Minister Benjamin Netanyahu on Sunday called on the international community not to recognize the news Palestinian unity government.

"Hamas is a terrorist organization calling for the destruction of the State of Israel," Netanyahu said at the beginning of his cabinet weekly meeting, according to Israel Radio.

"The international community's support for the new Palestinian government will not contribute to advancing the peace process, but will promote terrorism," he said.

Netanyahu said that his government will not recognize the Palestinian government, which is expected to be announced on Monday.

Israeli Minister of Environmental Protection Amir Peretz, however, said the door must remain open until the outlines of the unity government are clear.

In late April, Hamas, which rules the Gaza Strip, and Fatah, which rules the occupied West Bank, hammered out a reconciliation deal with a view to ending the rifts that have marred their relations since 2007.

The deal stipulates the formation of a national unity government to serve until legislative and presidential polls can be held in the West Bank and the Gaza Strip.

Israel has imposed a crippling siege on the Gaza Strip when Hamas was voted to power in 2006 and tightened the blockade when Hamas seized control of the Palestinian territory in 2007.