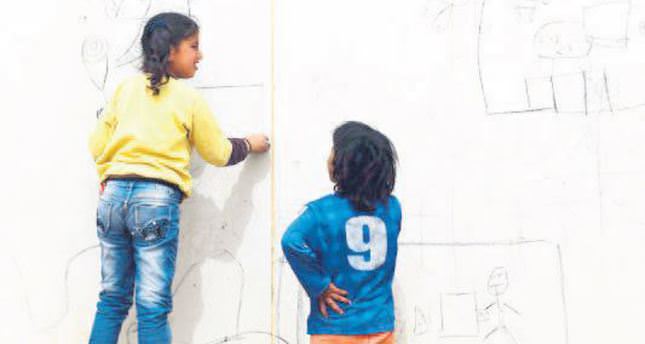 by AA Jun 05, 2014 12:00 am
ISTANBUL — Standing just 10 kilometers from war-torn Syria, Muhammad, 18, and his brother Ahmed, 19, talk proudly of their desire to study civil engineering, with Ahmed whispering, "Who else is there to help rebuild our dear country?" Here, the Harran camp is "home" to about 18,000 Syrians. About 2 percent of the 1 million Syrians in Turkey who have fled the conflict in their country and the rule of President Bashar Assad. Some of the Syrians living in Harran say Assad regime's agents sneak into the camp to spy on them. One camp official told an Anadolu Agency (AA) correspondent, "We hope you find someone to talk to." But Muhammad said: "I am not afraid to speak.

Hundreds of thousands of people have lost their lives - many of my relatives among them - and they weren't even fighting, just civilians who were killed." Ahmad said - despite the fact the camp is one of the best that has been constructed in Turkey for Syrians fleeing their homes - life was still "difficult." "I cannot find anyone to play chess, which is my favorite hobby," he said. There are nearly 5,000 students in the camp aged between five and 18, according to officials.

The Turkish government has provided a kindergarten, primary school and high school, and students are taught 10 hours a day, Monday through Friday, by more than 200 Syrian teachers, following the Syrian curriculum in the Arabic language. The Turkish government has also arranged Turkish language courses for students who graduate from high school. "We started six months ago in this camp," said Celal, the chair of the Turkish language course. "We had more than 90 students in the beginning, but now we have about 24 who are consistently attending Turkish lessons from 9 a.m. to 4 p.m.," he added.

About 350,000 students go to schools located within the camps, while about 115,000 attend schools outside. Hala, 17, graduated from high school with good grades only two months ago and has already become fluent in Turkish through the courses. "We must start somewhere in life, and I want to study architecture to design new houses," she said. "Integration is essential," declared Yasin Najjar, the industry minister for the Syrian opposition group. "Nearly a half million Syrian youths are learning the Turkish language, which is quite important for the future of political and economic relations between Turkey and Syria," added Najjar, who last weekend led a workshop between officials from Turkey's ruling Justice and Development Party (AK Party) and nongovernmental organization workers aiding Syrian refugees.

The number of Syrians in Turkey has reached almost a million people - far higher than the number officially registered, according to NGO officials.

One, an elderly Turkish woman, said: "They are our guests, not refugees. "When I was young, they used to be our relatives as there was no border - we all used to be together."

One NGO worker resembled the relationship between the Turkish people and Syrians fleeing their country to the "ansar-muhajir," referred to in Islamic history as the "ansar" (those who help) and the "muhajir" (those who migrated) with respect to the Muslim community that was forced, during the time of Prophet Muhammad, to leave their homeland and ask another community for help. He said: "The phrase emphasizes the responsibility that exists between Muslims to aid each other. "While those people who are suffering give their test to God here in this world, those who witness the situation are giving their test to humanity.

Thus, we have a position in this massacre as witnesses," he said. "Life is difficult here," said Celaleddin Güven, the mayor of the city of Şanlıurfa, which has more than 100,000 years of history and a 230-kilometer- border with Syria. "Those who are helping Syrians are themselves hungry, but the awareness of the situation in Syria keeps them moving ahead," he said.

The border between Syria and Turkey divides thousands of families as it never existed nearly 50 years ago, and no passport was required for people to visit each other.

Yasin Aktay, deputy chairman of the AK Party, said the massacre in Syria was one of the greatest in modern times, and the responsibility towards those who need help is asked of followers within all religions, not just Islam.

He said it was "tragic" that EU countries had decided to receive only 17,000 Syrian refugees from Turkey to lighten Turkey's responsibilities on the issue, as Harran Camp alone holds more Syrians than the number of refugees European countries have pledged to host.

Aktay argued that EU states were not actually helping Syrians, but being selective with those they were looking to transfer to their countries by taking in only qualified people, like engineers and doctors. "We must make sure they aren't just picking the best apples from the greengrocery," added one local official from the Turkish charity network Syria Humanitarian Aid Platform, which was established two years ago and distributes 400 loaves of bread each morning to those living outside of the camps, as well as providing a consultation services.

Osman Atalay from the Islamic Humanitarian Help charity reported that 2,761 trucks carrying humanitarian aid had been sent to Syria and TL 254 million given to Syrians.

Seventeen schools have also been constructed within Syria's borders, along with 40 bakeries, 12 mills, 13 wells, 19 food distribution centers and 15 orphanages. "I am even afraid to look at the news on Syria; I know Bashar will win the elections, which means there will be no way to go back home," Hala said.

A presidential vote is being held Tuesday in the parts of Syria that are under government control amid the ongoing civil war. President al-Assad is widely expected to win the election for another seven-year term in office, as the Syrian opposition has denounced the polls as a "mockery. But we have to keep moving," Hala said, adding: "Everybody needs to find something to keep their mind busy in camp life. It is an experience, although a bad one."

The Ankara-based Turkish thinkthank, the Center for Middle Eastern Strategic Studies, recently released a report indicating about 150,000 people have been killed in Syria, while three million have crossed into Turkey, Lebanon, Jordan and Iraq. Six million people have been displaced within Syria - more than 75 percent of them children.
RELATED TOPICS