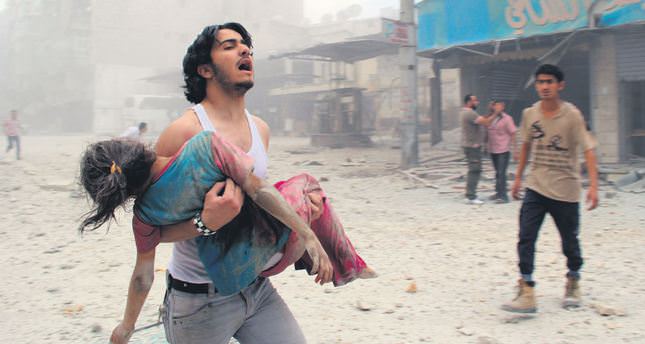 Syrian presidential elections, concluded on Tuesday drew sharp criticism from the international community and Syrian opposition, which called the voting held in the shadow of the civil war "a charade."

ISTANBUL — As the clashes have been continuing between Syrian forces and the opposition, the regime held "predetermined" presidential elections on Tuesday. The elections only took place in government-held areas. So President Bashar Assad was expected to easily win.

Along with Syria's two main internal opposition groups, which boycotted the vote, the international community decried the electoral process. U.S. State Department spokeswoman Marie Harf said that the election was a "disgrace" and called al-Assad a "brutal dictator" who had "no more credibility today than he did yesterday."

Harf said that the Syrian regime "intentionally denied millions of Syrians the right to vote and continues to massacre the very electorate it purports to represent and protect."

NATO Secretary-General Anders Fogh Rasmussen also criticized the election, saying "The Syrian presidential election is a farce. It doesn't fulfill international standards for free, fair and transparent elections. And I'm sure that no ally would recognize the outcome of these so-called elections."

Apart from the U.S., many other Western powers and Turkey and Gulf Arabs denounced the election, calling it utterly "devoid of political participation of millions of Syrians" in the London 11 core group of Friends of Syria communiqué on May 15.

The ministers of the London 11 countries at a meeting agreed not to recognize the "illegitimate presidential election," calling it "the Assad regime's unilateral plan" and a "parody of democracy."

Acting as the umbrella group of the Syrian opposition, the Syrian National Coalition (SNC) described the re-election as "a black comedy." The SNC announced that the Syrian regime under the al-Assads has never held fair elections and has ruled as a dictator dynasty for 44 years. "The Assad regime was set to hold presidential elections on June 3. The elections have already started at other countries' embassies," said Dr. Ahmad Jakal, a member of the Syrian Coalition and Opposition Forces Political Committee, who pointed out that the winner of the elections is beyond question, but the most important thing is the final percentage and how the results would be announced.

"There is only one way ahead for us. The existing regime must be toppled with the power of the public, and the Free Syrian Army should be armed," Jakal said. He indicated there is a desperate need for allies that are loyal to the necessary regime as the U.N. alliance. The Syrians need more action than the statements of its friends," he said.

Jakal is expecting international countries intervening in the Syrian issue to keep their promise. United Nations Secretary General Ban Ki-moon also refused to recognize the elections, saying it is out of the scope of Geneva meetings aimed to find a political solution to ongoing civil war in the country.

January's Geneva II peace talks have failed to produce a solution for the Syrian crisis. Mustafa Sıtkı Bilgin, a Middle East expert, spoke to Daily Sabah about the elections, saying: "The Syrian elections took place with two main aims: First, to provide legitimacy for al-Assad himself, and second, to reinforce his declining political power. These elections have been conducted under catastrophic civil war conditions, as 160,000 people have been killed and 7 million people had to leave the country. That is why these elections could only be called bloody elections."

He added, "They have no legitimacy and international recognition. But these elections have some implications for the future. Assad could have claimed that now he has the peoples' support as a result of elections, and this would make it easier for him to hamper compromise
attempts proposed by the opposition."

The Western world and a significant part of the Arab world have declared they will not recognize the election results. The Friends of Syria Group, including Turkey, denounced the elections as illegitimate.

While the balloting took place in areas under government control, clashes between opposition groups and al-Assad's forces continued violently.

According to opposition activists, on Tuesday at least 100 people, including 13 children and seven women, were killed in air and ground operations across Syria carried out by President Bashar Assad's forces.

More than 162,000 people have been killed during the ongoing three-year conflict in Syria, which has also internally displaced more than 6.5 million people. At least 2 million Syrians are now registered as refugees in neighboring Turkey, Lebanon, Jordan and Iraq.
RELATED TOPICS