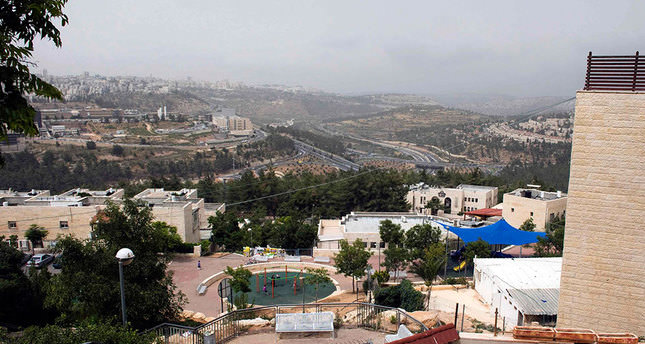 by Jun 07, 2014 12:00 am
JERUSALEM — Israel's decision to unveil a new settlement plan for 3,200 new homes in reaction to the Palestinian unity government is widely condemned by countries across the world, including the U.S., Turkey and EU.

Israel unveiled plans for 3,200 settler homes Thursday in retaliation for the formation of a Palestinian unity government backed by Hamas and the international community.

Tenders for nearly 1,500 new settlement houses and plans to advance some 1,800 others were issued just 72 hours after the new Palestinian government was sworn in, ending seven years of rival administrations in the West Bank and Gaza.

Western states have shown support for the Palestinian lineup, but Israel says it will boycott what it denounces as a "government of terror."
The news drew a furious reaction from the Palestinians, who pledged to seek an anti-settlement resolution at the U.N. Security Council for the first time in more than three years.

U.N. chief Ban Ki-moon was "deeply concerned" by reports of the new tenders. "The secretary general calls on Israel to heed the calls of the international community to freeze settlement activity and abide by its commitments under international law and the roadmap," Ban's spokesman said.

The European Union said it was "deeply disappointed" by Israel's plans. "We call on the Israeli authorities to reverse this decision and to direct all their efforts towards an early resumption of the peace talks," it said, adding, "This move is unhelpful to peace efforts."

Dan Shapiro, U.S. ambassador to Israel, also condemned the Israeli move. "We oppose settlement construction in the West Bank as well as announcements regarding such construction," Shapiro told Israel's Army Radio. He added, "We would do so with or without this disputed case of a new Palestinian transitional government."

Turkey has also condemned Israel's move to construct housing units in the West Bank and East Jerusalem. "Israel's settlement building, which violates international law and damages the prospect of a two-state solution, is unacceptable," Turkish Foreign Ministry said in a written statement on Friday.

Israel, however, rejected the criticism with an unnamed official saying in a statement it was "strange" there were members of the international community who say a Palestinian unity government, backed by the Hamas movement, could promote peace.

Of the 1,454 tenders, 400 homes are to be built in Israeli-annexed East Jerusalem and the rest in the occupied West Bank in what Housing Minister Uri Ariel described as "a fitting Zionist response to the establishment of the Palestinian government of terror."
Last Update: Jun 07, 2014 9:36 am
RELATED TOPICS