EU support for Palestine on the rise, says ambassador 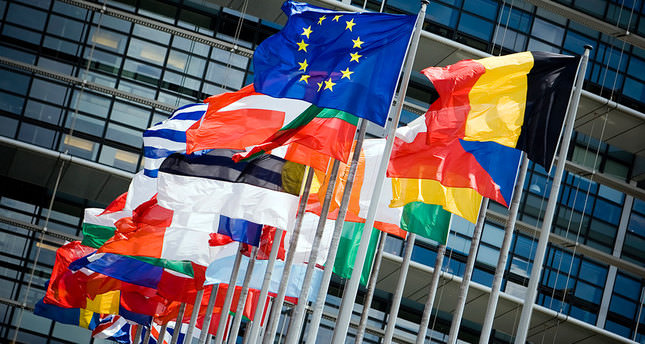 by AA Jun 08, 2014 12:00 am
ANKARA — Palestine has succeeded in its efforts to change EU's negative stance towards the country by responding to the demands of the international community, Palestinian ambassador in Ankara said Saturday.

In response to the formation of a new Palestinian unity government that involves Hamas, Israel on Thursday announced plans to build nearly 1,500 settler units in an area comprising the West Bank and East Jerusalem.

The move has been widely denounced by the West, with EU threatening to impose sanctions.

"Ten years ago, whenever Israel took a step, it used to get full support from the EU and the U.S," Nabil Maarouf told Anadolu Agency. "But we succeeded in creating a gap between EU and Israel."

"We are deeply disappointed that the Israeli Land Administration has published new tenders for 1466 housing units in settlements in East Jerusalem and the rest of the West Bank. This move is unhelpful to peace efforts," EU's External Action Service said Thursday.

Maarouf said: "Previously nobody condemned Israel, but now it is criticized, condemned and boycotted. We proved that we are in favor of peace (...) and who is complicating the process is Israel. They did not respond positively to the demands of the international community."

EU urged Israeli authorities to reverse the decision and to direct their efforts towards a resumption of the stalled peace talks.

Earlier, the EU took steps against Israel due to its continuing occupation of the Palestinian territories and prohibited EU investments financing Israeli settlement activities in the occupied West Bank and East Jerusalem.

The reconciliation deal between Palestine's rival factions Fatah and Hamas led Israel to pull out of peace talks brokered by the U.S. The talks were seeking an agreement on a "two-state solution."

Maarouf expressed concern that the unity government would have to deal with two major problems concerning the future of both sides' security forces and the salaries of the Hamas-hired employees.

Since 2007, Hamas and Fatah have run their own governments in Gaza and the West Bank respectively.

Hamas has appointed about 40,000 employees since 2007. Maarouf said it was a question whether the unity government really needed this "huge number" of employees and how the salaries would be paid.

"We are talking about $35 million monthly," Maarouf said. "Qatar is going to pay the salaries of the employees this month, but in the next months, this will be a problem."

These problems will not threaten the reconciliation, the ambassador added.