40 killed in regime attacks across Syria 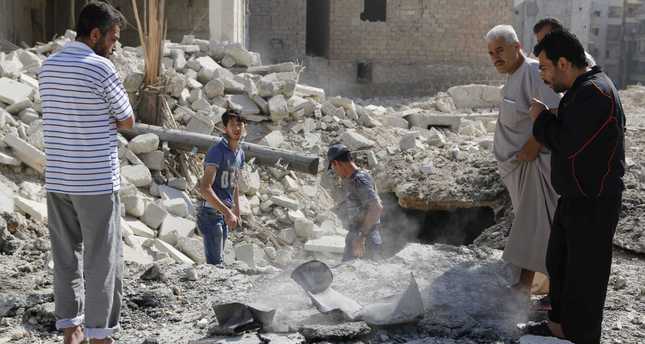 by AA Jun 09, 2014 12:00 am
ALEPPO — At least 40 people, including women and children, were killed during operations allegedly carried out across Syria on Sunday by forces loyal to the regime of President Bashar al-Assad, according to opposition activists.


Air and land operations involving heavy weaponry killed 13 in Aleppo, nine in the suburbs of capital Damascus, six in Homs, five in Idlib, three in Hama, and two each in Daraa and Latakia, according to the London-based Syrian Network for Human Rights, which tracks civilian and opposition casualties.

The Syrian Revolution General Commission claimed that a large number of government troops were killed in an ambush by the Free Syrian Army in Kalamun, Damascus.
Assad forces launched heavy weapon attacks on the southern Muleiha district of Damascus, and clashes erupted between FSA and government troops around the Yarmouk refugee camp in the south of the capital, the SRGC added.
The Commission further said that a large number of residential areas were heavily damaged when army helicopters dropped barrel bombs in opposition-controlled areas in Aleppo, and the capital suburbs of Douma and Darayya.
Syria's official news agency SANA claimed that regime forces cleared several regions of armed groups in various operations launched across Aleppo, Daraa, Idlib and Homs.
Syria has been gripped by almost constant fighting since the regime launched a violent crackdown in response to anti-government protests in March 2011, triggering a conflict, which has spiraled into a civil war.
The UN has stopped updating its death toll for the country because an official count had become too difficult to verify. At least 100,000 deaths were recorded in the last official count in July 2013.
More than 100,000 people have been killed during the three-year conflict, which has left more than 6.5 million people internally displaced according to the UN. Nearly 2.5 million Syrians are also registered as refugees in neighboring countries, including Turkey, Lebanon and Iraq.
Last Update: Jun 09, 2014 2:10 pm
RELATED TOPICS