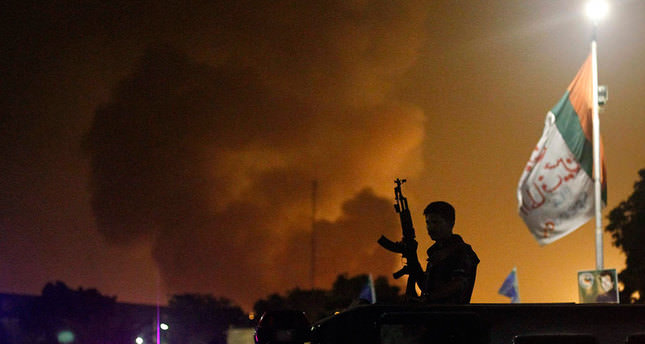 by Anadolu Agency Jun 09, 2014 12:00 am
MAZAR-I-SHARIF — At least 74 Taliban members were killed and 23 wounded in military operations against the organization in Afghanistan on Sunday.


According to a written statement by the Ministry of Interior, the Afghan security forces launched an assault against the Taliban in numerous provinces of Afghanistan such as Kunar, Kunduz, Zabul, Paktiya, Maydan Vardak, Paktika, Herat and Helmand.
Three Taliban members were also captured and a great number of weapons and explosives were seized, according to the statement.
TALIBAN ATTACK AIRPORT IN PAKISTAN
ISLAMABAD — Taliban militants disguised as security forces stormed Pakistan's busiest airport on Sunday and at least 28 people were killed in a night-long battle at one of the country's most high-profile targets.
The assault on Jinnah International Airport in Karachi, Pakistan's sprawling commercial hub of 18 million people, all but destroys prospects for peace talks between the Taliban and the government of Prime Minister Nawaz Sharif, who came to power last year promising to find a negotiated solution to years of violence.
It also deals a heavy blow to Sharif's efforts to attract more foreign investors to revive economic growth and raises questions about security at the country's key installations.
The attack began just before midnight when 10 gunmen wearing military uniforms shot their way into the airport's old terminal used mainly for charter and executive flights.
Gun battles raged through the night until security forces regained control of the airport at dawn. Passengers were evacuated and all flights were diverted.
The Pakistani Taliban, an alliance of insurgent groups fighting to topple the government and set up a sharia state, claimed responsibility, saying it was in response to army attacks on their strongholds along the Afghan border.
"It is a message to the Pakistan government that we are still alive to react over the killings of innocent people in bomb attacks on their villages," said Shahidullah Shahid, a Taliban spokesman.
Pakistan's paramilitary force said that the attackers were ethnic Uzbeks. Pakistani officials often blame foreign militants holed up in lawless areas on the Afghan border for staging attacks alongside the Pakistani Taliban around the country.
"Three militants blew themselves up and seven were killed by security forces," Rizwan Akhtar, the regional head of the paramilitary Rangers, said in televised remarks. "The militants appear to be Uzbek."
GUN BATTLE

Karachi is Pakistan's biggest city and a key hub of business activity, home to a vibrant stock exchange and companies. But it is also a violent and chaotic place where Taliban militants and criminal gangs operate freely underground.
At the airport, gun battles went on for five hours and television pictures showed fire raging as ambulances ferried casualties away.
At least three loud explosions were heard as militants wearing suicide vests blew themselves up.
By dawn on Monday, the army said the airport had been secured but heavy smoke rose above the building.
"Ten militants aged between 20 and 25 have been killed by security forces," said a spokesman for the paramilitary Rangers force. "A large cache of arms and ammunition has been recovered from the militants."
"A sweep operation is being carried out at the airport which is expected to be completed by midday (0700 GMT)."
The civil aviation authority said it expected operations to resume at the airport by 0900 GMT.
Officials said no aircraft had been damaged.
Peace talks between the government and the Pakistani Taliban had failed in recent months, already dampening hopes of reaching a negotiated settlement with the insurgents, who continue attacks against government and security targets.
Last Update: Jun 09, 2014 1:25 pm
RELATED TOPICS