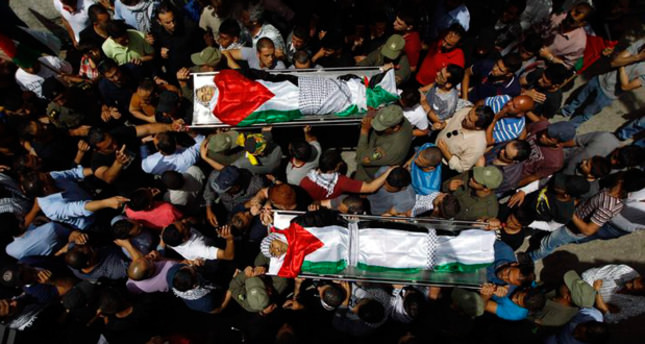 by Jun 11, 2014 12:00 am
JERUSALEM — An autopsy was due to be performed on Wednesday on the body of a Palestinian teenager killed last month in an incident that a human rights group said might constitute an Israeli war crime.

Palestinian medics have said that Nadim Nuwara, 17, and Muhammad Abu Thahr, 16, were shot dead by Israeli troops using live ammunition on May 15 as they took part demonstration in the occupied West Bank.

The Israeli military said its forces fired only rubber-coated bullets that day, and that an investigation of their deaths was still under way.
Both teenagers were buried the day after they were killed. Palestinian officials said an autopsy would be performed on Nuwara's body on Wednesday, at his family's request.

Palestinian pathologist Saber Al-Aloul said U.S. and Danish pathologists would be present at the autopsy in the Palestinian Institute of Forensic Medicine in the West Bank town of Abu Dis. He did not say if or when results would be published. An Israeli physician will also attend, Israeli and Palestinian officials said.

New York-based Human Rights Watch, in a report published on Monday and entitled "Killing of Children Apparent War Crime", said the Israeli military's assertion that its forces had not fired live ammunition does not stand up to scrutiny.

Israeli Defence Minister Moshe Yaalon has suggested the surveillance video might have been doctored. The human rights groups that distributed the material denied that.

The demonstration that Thahr and Nuwara attended was at times violent, with Palestinian youths hurling stones at the Israeli forces. But the security cameras suggested there was no stone throwing going on when the two teenagers were shot.