US set to boost Iraqi forces, not air strikes 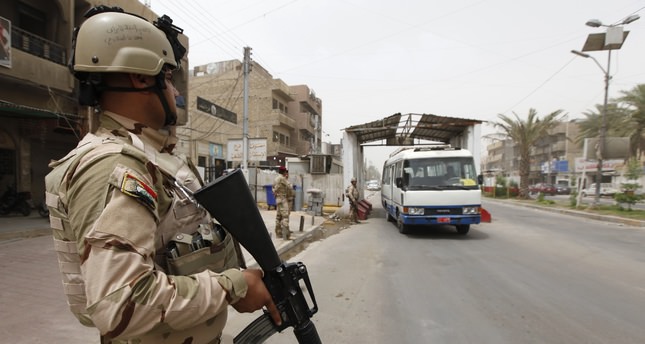 by Jun 12, 2014 12:00 am
BAGHDAD — The White House signaled on Wednesday that it was looking to strengthen Iraqi forces to help them deal with an insurgency rather than to meet what one U.S. official said were past Iraqi requests for U.S. air strikes.

An Obama administration official who spoke on condition of anonymity said Iraq had previously made clear its interest in drone strikes or bombing by manned U.S. aircraft to help it beat back the militant onslaught.

Sunni rebels from an al Qaeda splinter group overran the Iraqi city of Tikrit on Wednesday and closed in on the biggest oil refinery in the country, making further gains in their rapid military advance against the Shi'ite-led government in Baghdad.

The threat to the Baiji refinery came after militants from the Islamic State in Iraq and the Levant, or ISIL group, seized the northern city of Mosul, advancing their aim of creating a Sunni Caliphate straddling the border between Iraq and Syria.

The White House, however, suggested that air strikes were not at the top of its agenda as it considers what it may do to help the Iraqi government against an insurgency that has drawn strength from the civil war in neighboring Syria.

"While the national security team always looks at a range of options, the current focus of our discussions with the government of Iraq and our policy considerations is to build the capacity of the Iraqis to successfully confront and deal with the threat posed by ISIL," White House national security council spokeswoman Bernadette Meehan said in an emailed comment.

The Obama administration official who spoke to Reuters on condition of anonymity declined to provide details on what the United States might do to help Iraq, saying only that it was "considering (a) range of requests."

An Iraqi official told Reuters that Iraq wanted U.S. air strikes but believed the Obama administration was not interested in getting involved.

The official said such strikes would be covered under the strategic framework agreement signed by the United States and Iraq in 2008. Within this, limited U.S. forces could operate on the ground to carry out such strikes, he added.

But the official said he did not think the Americans had any interest in such a deepened commitment.

The Times quoted American experts who visited Baghdad this year as saying they were told that Iraqi leaders hoped American air power could be used to hit militant staging and training areas inside Iraq, and help Iraq's forces stop them from crossing into the country from Syria.

The White House declined to confirm either newspaper report.

"We are not going to get into details of our diplomatic discussions but the government of Iraq has made clear that they welcome our support" against the militants, Meehan said in a separate statement.

"We have expedited shipments of military equipment since the beginning of the year, ramped up training of Iraqi Security Forces, and worked intensively to help Iraq implement a holistic approach to counter this terrorist threat," she added. "Our assistance has been comprehensive, is continuing and will increase."

The fall of Mosul, Iraq's second-biggest city, is a blow to attempts to defeat the militants, who have seized territory in Iraq over the past year following the withdrawal of U.S. forces.

A former U.S. official, who worked on Iraq issues, said the Obama administration viewed Iraq as a dispute that did not affect the United States directly and that Washington should steer clear of entangling itself in it directly.

Another U.S. official who spoke to Reuters on condition of anonymity questioned the utility of drones, saying it might not be possible to deploy them effectively in time to stem the current crisis in Iraq.

"What does it require to have drones come to a country? It requires a very, very high level of intel capability and expertise. So you can't just send drones on an airplane and have them land and have them work," said this official.

"They wouldn't have, in this sort of period of time, the ability, given what is going on here, to field the drones (effectively)," he added. "I believe it would take longer than the current crisis (may require)."

This official said that once militants had taken control of cities, it would require "incredibly intense fighting" on the ground to dislodge them.