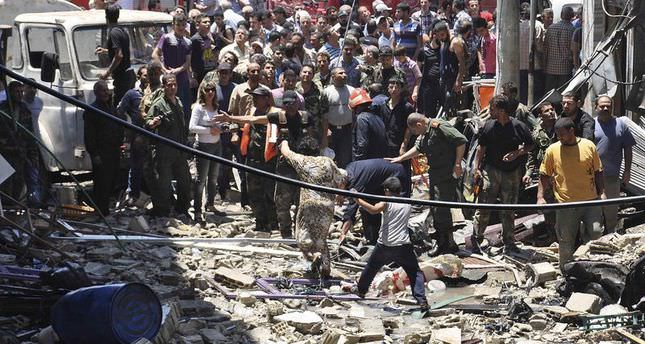 by AA Jun 13, 2014 12:00 am
ALEPPO — At least 37 people, including six women and two children, were killed during operations across Syria on Thursday, allegedly by forces loyal to the regime of President Bashar al-Assad, according to opposition activists.

Air and land operations involving heavy weaponry killed 15 in the suburbs of capital Damascus, seven in Aleppo, four each in Hama and Idlib, two each in Daraa, Homs and Deir ez-Zor, and one in Quneitra, according to the London-based Syrian Network for Human Rights, which tracks civilian and opposition casualties.

Meanwhile, the Syrian government's official news agency SANA claimed security forces "neutralized" a large number of armed groups during operations in Aleppo, Idlib and in the suburbs of capital Damascus.

More than 100,000 people have been killed during the three-year conflict, which has left more than 6.5 million people internally displaced according to the UN. Nearly 2.5 million Syrians are also registered as refugees in neighboring countries, including Turkey, Lebanon and Iraq.