Iraq cracks down on ISIL with airstrikes, killing 40 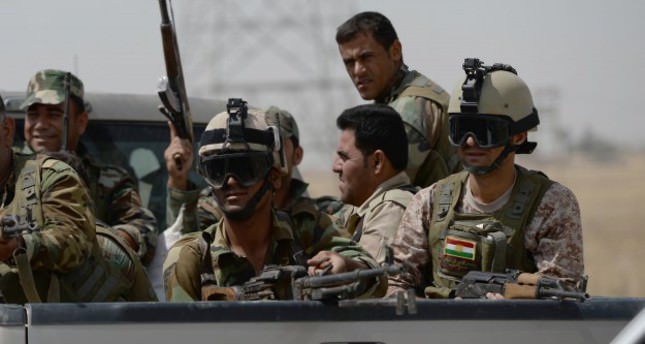 by AA Jun 13, 2014 12:00 am
Iraqi air raids killed 40 people including the Islamic State of Iraq and the Levant, or ISIL, militants and defectors from army and police on Friday afternoon, according to a tribal source.

The source, who spoke on condition of anonymity, said that the Iraqi Air Force bombed locations of ISIL militants and other armed groups including the "Saddam mosque" in Tikrit -- 140 kilometers northwest of Baghdad -- and "Fath mosque" in Baiji -- 200 km north of Baghdad.

Earlier, ISIL militants and other armed groups in Tikrit and Baiji called on police, army and intelligence members to declare "repentance and innocence from Al-Maliki's government," reported eyewitnesses.

The death toll is expected to rise as a result of the continuing raids, a security source said. It was not possible to get an immediate comment from the Iraqi government on the reported fighting in Tikrit and Baiji.

Late on Friday, violent clashes between Kurdish Peshmerga forces and Arab tribes supported by ISIL erupted in the town of Jalula in Iraq's eastern province Diyala, reported a local official.

"Clashes between the Peshmerga forces and some Arab tribes backed by ISIL militants took place in the 'Tajnid' area, 15 km south of Jalula town," Said Bashir Abdullah, a member of the Council of Jalula, told Anadolu Agency.

Abdullah also pointed out that "some residents start leaving the town on fear of security threats."

He also accused "some Arab tribes" of leading hostile campaigns against Kurds in the area and of giving support to ISIL militants.

Abdullah denied reports that said some regions of Jalula were under ISIL's control.

ISIL was established shortly after the U.S.-led invasion of Iraq in 2003 and was most recognizably known as al-Qaeda in Iraq, under the leadership of Jordanian militant Abu Musab al-Zarqawi.

Al-Zawahiri cut ties with ISIL in February 2014 after a dispute with another militant group, Jabhat al-Nusra.

Meanwhile, Al-Maliki visited a sacred Shia tomb in Samarra -- the largest city of Salahuddin province -- on Friday, vowing to break the militants' hold in the province, said a security source.

The source said that Al-Maliki met the governor of Salahuddin province, Ahmed Abdullah al-Jubouri, and vowed " to provide the necessary security forces to liberate the province of ISIL militants" and to re-establish the central rule in the province.

A number of Baghdad residents, who are using those services, told Anadolu Agency correspondent that "the social networking sites were cut off abruptly this afternoon with no previous warning. "