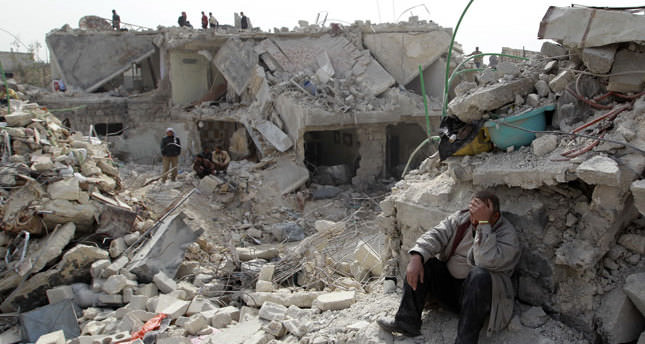 by AA Jun 13, 2014 12:00 am
The Syrian opposition announced on Wednesday that it needs lethal aid to defeat ISIL and that extremist threats posed by Syria's ongoing conflict will continue to spillover to new fronts unless the West supplies lethal aid to the opposition. "We have warned right from the beginning about the spread of extremism," Colonel Afif Suleiman, the commander of the Free Syrian Army's Idleb Military Council, said via Skype during a panel discussion in Washington. "Now you see what is happening in Iraq." The Islamic State of Iraq and the Levant, which has developed into a formidable force inside Syria, gained near complete control of the northern Iraqi city of Tikrit, Saddam Hussein's birthplace, on Wednesday. That gain rapidly followed their near complete capture of Mosul, Iraq's second-largest city, on Tuesday.

The group seized large swaths of western Iraq's Anbar Province in late December, including much of Fallujah and Ramadi. The Syrian rebel commanders reiterated their call for heavy weapons to combat the threat posed by both the Syrian government and extremist groups, such as the Islamic State of Iraq and the Levant. Suleiman, the rebel commander, said that rebel forces will not be able to fully defeat extremist groups without increased firepower. "You saw that the Iraqi regime was unable to push back the extremists," he said.

"With our simple resources we have been able to kick them out of our areas, but we will not be able to remove them from Syria completely unless we are provided with the necessary tools to carry out this mission." Robert Ford, America's former ambassador to Syria, said Tuesday that he left the Obama administration because he could no longer support the administration's policies in Syria, and called for the U.S. to supply the moderate armed opposition with lethal aid. "As the situation in Syria deteriorated, I found it ever harder to justify our policy," Ford wrote in a New York Times op-ed published Tuesday. "It was time for me to leave."

Colonel Abdul-Jabbar Akidi, the Free Syrian Army's elite forces commander, said that the ambassador was a "witness" to Syria's bloodshed. "Ambassador Ford was a courageous man," said Akidie. "He saw things first hand." Suleiman warned that the threat posed by extremist groups operating in Syria will continue to seep across borders, potentially threatening the U.S. itself. "We urge the U.S. administration to seriously consider that the Syrian conflict no longer poses a threat to Syrian civilians," he said. "But it will spread all across the region, and one day it might reach the United States of America."
Last Update: Jun 13, 2014 1:18 am
RELATED TOPICS