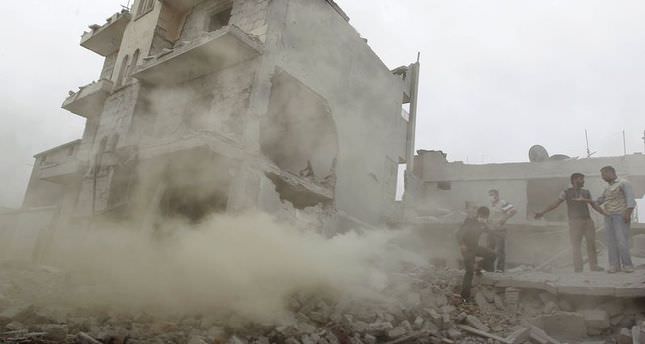 by AA Jun 13, 2014 12:00 am
HATAY — Syrian regime attacks on Friday have killed one person and wounded three others in the Latakia governorate, opposition sources said.
Regime forces launched air strikes on the town of Keseb and villages of Kepir and Murtlu in the Turkmen majority Bayir-Budjak area.
A 60-year-old man who was wounded by the strikes died on the way to a hospital in Turkey, sources said.
The three injured and ten others who had earlier been affected by clashes in the city of Idlib have been taken to Turkish hospitals in the province of Hatay, AA correspondent said.
More than 100,000 people have been killed during the three-year conflict in Syria, which has left more than 6.5 million people internally displaced, according to the UN.
Nearly 2.5 million Syrians are also registered as refugees in neighboring countries.
Last Update: Jun 13, 2014 9:23 pm
RELATED TOPICS